For the first time, researchers have reported on the levels of the environmental contaminant trichloroethylene (TCE) in breast milk. Scientists at the University of Arizona Superfund Research Program (UA SRP), in collaboration with the Mariposa Community Health Center, found that TCE concentration in breast milk was significantly associated with the concentration of TCE in water used for bathing and laundry, but not for drinking and cooking. The researchers also detected TCE in all water samples collected in the study. UA SRP researchers led by Paloma Beamer, Ph.D., published the study in Environmental Science and Technology. 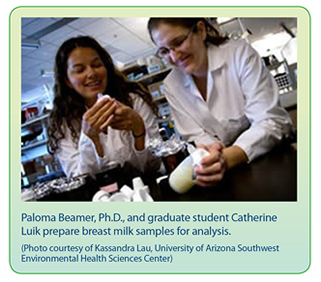 TCE, a degreasing agent, is the most frequently reported organic contaminant in groundwater. More than 300 million pounds of TCE are produced each year in the United States. TCE exposure is associated with speech and hearing problems, skin rashes, diabetes, kidney disease, and urinary tract and blood disorders. TCE has also been associated with autoimmune diseases including lupus and certain types of cancer, such as leukemia, non-Hodgkin's lymphoma, and kidney, liver, and cervical cancer.

In this exploratory study, investigators sampled breast milk from women in 20 households in Nogales, Ariz., a city known to have TCE-contaminated groundwater. Researchers also collected samples of water used for drinking, cooking, laundry, and bathing and administered a risk factor questionnaire.

Nogales, Ariz., was selected as the study site for this project because of an increased prevalence of lupus and cancers associated with TCE exposure in the region. Nogales also has existing TCE contamination, partly because of solvent dumping at a nearby industrial site. Nogales is the largest U.S.-Mexico border city in Arizona and faces the potential for additional TCE exposure from rapid growth of industrial production along the border.

"The results of this exploratory study suggest that more in-depth studies will be important for understanding the risk to infants of TCE exposure via breast milk intake and how to reduce the mothers' exposure," said Beamer.

The United States Environmental Protection Agency (EPA) has identified quantification of TCE in breast milk as a high priority need for risk assessment. This study and future analyses will provide a better understanding of the risk factors associated with TCE in breast milk. Understanding the risk will facilitate the development of intervention strategies to reduce TCE exposure to mothers and their children. In the meantime, the researchers stress that mothers should continue to breastfeed their children to ensure critical health benefits for both mother and baby.