A breakthrough in bioassay technology allows detection of attomolar concentrations of biomolecules on a microchip. This concentration (10-15 mol/m3) is equivalent to measuring grains of salt in 10 tons of potato chips1. This new nanotechnology approach to detecting proteins and other compounds increases sensitivity more than 1,000-fold over conventional assays, and yet is affordable and easy to use. Developed by researchers at the University of California (UC) Davis Superfund Research Program (SRP), the assay could have a transformative impact on investigations in environmental health, food sciences, and medicine.

Immunoassays are a type of bioassay that use antibodies (proteins produced by the immune system) that serve as tags by binding to the molecule or analyte of interest with a high degree of specificity. Concentrations of analytes are measured by the release of light-emitting photons from fluorescent dyes. Immunoassays were taken to a much smaller scale – the nanoscale – in a new system developed by Ian Kennedy, Ph.D., and his engineering team together with immunoassay biologists in the lab of Bruce Hammock, Ph.D., both at UC Davis. A collection or array of nanoscale wells, each containing a single antibody-coated nanoparticle, was used to detect analytes (Figure 1), and the number of photons emitted per second was measured one photon at a time. The optimum nanoparticle size was 40-100 nm for use with visible wavelengths of fluorescence. For a sense of scale, a strand of human DNA is 2.5 nm in diameter2 (1 nm = 10-9 meters, or 1 billionth of a meter).

As presented in the November 2012 issue of ACS NANO, Jin-Hee Han, Ph.D., a post-doctoral fellow in Kennedy’s lab, developed the nanoparticle platform by using an electric field to drive antibody-coated nanoparticles into nanowells, creating a 2-dimensional array on a microchip that behaves as a photonic crystal (PC). PCs are three-dimensional structures that can manipulate the flow of light, or more specifically, photons, and enhance sensitivity. The nanoparticles in the new platform provide small, highly effective solid supports that overcome many shortcomings of other PC assays.

Even with nanoparticle advantages, the key challenge was to reduce background signals. Han and Lakshmana Sudheendra, Ph.D., now Associate Specialist at UC Davis SRP, maximized sensitivity by matching the size of the particle to the size of the well, and optimizing the distance between wells for a given light source/dye/wavelength combination. The new assay detected human epidermal growth factor receptor 2 (HER2; a breast cancer biomarker) at concentrations at least 1,000 times less than those measured in a conventional immunoassay (Figure 2). 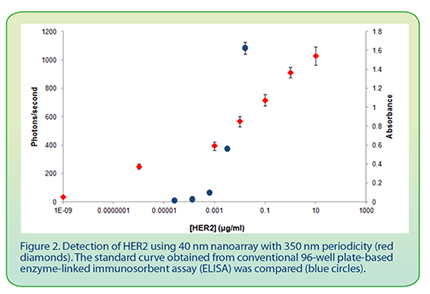 This affordable, fast, easy-to-use immunoassay technology holds promise for a wide range of applications. The UC Davis team has several patents pending as they look toward commercializing the technology, as it could be a powerful tool for detecting a variety of analytes. Currently, immunoassays in development can detect Staphylococcal enterotoxin as well as Salmonella and E. coli in food, metabolites of pesticides in humans, and several live infectious disease pathogens.

The work is funded in part by the NIEHS SRP, the NIH Institute of Allergy and Infectious Diseases, and the U.S. Department of Agriculture.