Vapor intrusion occurs when contaminants in the form of vapor, such as trichloroethylene (TCE) and perchloroethylene (PCE), migrate from below the ground into buildings. According to the researchers, with more than 450,000 contaminated sites in the U.S., the migration of contaminants from sites where hazardous chemicals were used, stored, or abandoned poses considerable risk to nearby residences and commercial buildings.

There is a need for instruments that provide frequent, long-term monitoring of contaminated sites to assess exposure from chemicals, identify contamination sources, and monitor remediation progress. With current technology, the cost to perform measurements stems primarily from the labor involved in placing and replacing the tubes used to collect vapor samples. Laboratory analysis of these tubes costs up to $350 per sample, which can add up to more than several thousands of dollars annually when considering that multiple tubes must be used per site.

A New Approach to Monitoring Contaminants 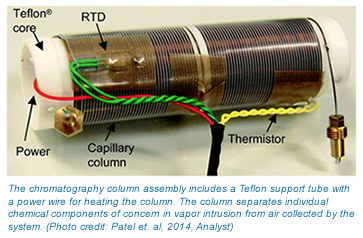 The newly developed Seacoast Science vapor intrusion monitor is inexpensive compared to common laboratory equipment, is portable for easy setup, and does not require compressed gases to operate, making it safe to leave unattended. Scientists continue work to develop the instrument so it can be manufactured for less than $2,000 and left operating unattended for up to 12 months, during which it can run repeating sample collection and analysis cycles.

The system consists of a preconcentrator that traps and concentrates contaminants from the surrounding air, a chromatography column to separate individual chemical compounds, and a low-cost detector array to identify the chemicals.

The preconcentrator and the chromatography column are heated by an electric current that passes through the metal sheathing, and the sampled air is carried through the column. This provides adequate detection but reduces the need for additional materials, such as other bottled carrier gases for compressed cylinders that are needed for traditional, more expensive monitors. 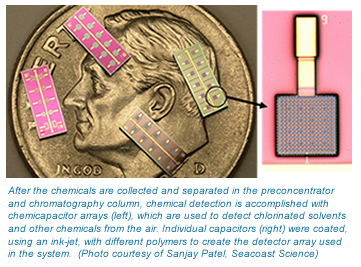 The monitor builds on earlier developments of sorbent traps to collect and concentrate the contaminants, providing a solution for remote and automated detection of compounds in the air.1 The automated, reusable, low-maintenance system continuously collects and analyzes the air and has proven capable of detecting low levels (one part per billion by volume) of four chlorinated compounds typical of vapor intrusion: dichloroethylene, trichloroethane, TCE, and PCE.

Scientists at Seacoast Science continue work to improve the system for long-term tracking of vapor intrusion chemicals. Future work will focus on identifying methods to improve detection sensitivity and characterization of humidity and temperature to reduce the system’s sensitivity to changes in ambient temperature.

Sanjay Patel, Ph.D., vice president of research and chief technology officer, leads the project at Seacoast Science with funding from a Small Business Innovation Research grant awarded by the SRP to foster the commercialization of an unattended vapor intrusion monitor.