Research Brief 244: Switchgrass and Bacteria Work Together to Remove PCBs from Soil

Switchgrass and Bacteria Work Together to Remove PCBs from Soil

Researchers at the University of Iowa Superfund Research Program (Iowa SRP) Center have found that switchgrass, a plant native to central North America, can effectively remove polychlorinated biphenyls (PCBs) from contaminated soil. When PCB-degrading bacteria is added, removal of PCBs from the soil can increase further. This phytoremediation method may be an efficient and sustainable strategy to removing PCBs from hazardous waste sites. 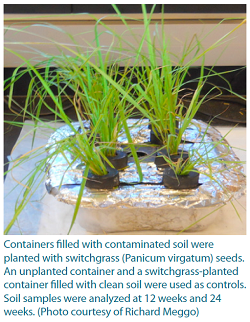 PCBs are a family of chemical compounds that were widely used in industrial applications and still persist in the environment in air, water, soil, and foods. Researchers led by Timothy Mattes, Ph.D., and Jerald Schnoor, Ph.D., focus on using plants like switchgrass and poplar trees for cleaning up soil PCBs at contaminated waste sites.

The researchers report that switchgrass successfully removed up to 40 percent of the PCBs from contaminated soils in lab experiments. When boosted by a PCB-oxidizing microorganism, the removal rate reached 47 percent.

"The possibility of synergistic interactions between the switchgrass and the PCB-degrading bacteria suggests that employing both plants and bacteria in PCB remediation strategies holds promise for enhanced removal of these recalcitrant compounds from contaminated sites," said Mattes. 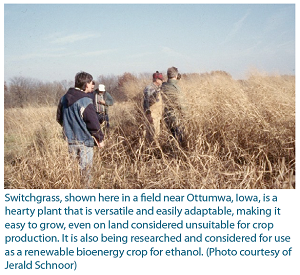 Scientists spiked soil with a mixture of the three PCBs at concentrations that pose a potential risk to human and environmental health but are also commonly found in soils and sediments. They aged the contaminated soil for two months before planting switchgrass seeds in the contaminated soil. In addition to testing phytoremediation by switchgrass, they also tested for improved degradation by bioaugmentation, or adding specific microorganisms into the soil microbial community.

After 24 weeks, about 40 percent of the total PCB mass had been removed from the soil treated with switchgrass, significantly higher than the 30 percent removed from untreated soil. In microcosms where a PCB-oxidizing microorganism (Burkholderia strain LB400) was also applied, researchers observed improved degradation of PCB 52 and removal of about 47 percent of the total PCBs. The presence of switchgrass also facilitated the microorganism's survival in the soil.

A More Sustainable Way to Clean Up Sites

The research, which combines phytoremediation with bioaugmentation, may lead to a natural, environmentally friendly approach to reducing PCBs that could be much less expensive and less disruptive than traditional cleanup methods.

"Normally, we think that if we can get plants to grow in contaminated soil that the proper ‘bugs' will grow in the root zone to degrade the contaminants,” said Schnoor. “What’s new in this story is that we can actually help the process along by adding the proper bugs (LB400) to the root zone at the time of planting and beyond."