New research shows that deletions or duplications of long stretches of DNA, also known as copy number variations (CNVs), that occur in several gene locations are associated with a higher risk of developing arsenic-induced skin lesions. Skin lesions are a hallmark of arsenic toxicity that appear relatively early with chronic arsenic exposure. This newly discovered link may help to explain why some people exposed to arsenic develop skin lesions and get sick while others exposed to the same levels do not.

Columbia SRP researchers, led by Habibul Ahsan, M.D., now a professor at the University of Chicago, established the Health Effects of Arsenic Longitudinal Study (HEALS) in 2000 to investigate the health effects of arsenic exposure in a group of adults in Araihazar, Bangladesh.

For the new study, the researchers randomly selected 2,171 participants in the HEALS cohort without arsenic-induced skin lesions at enrollment and followed up with them every two years for a total of eight years to assess whether they developed skin lesions.

Using DNA from the study participants’ blood samples, the researchers looked at each person’s genome, or the complete set of their genes. CNVs in the genome vary between individuals, and such variance is normal. However, certain CNVs have been linked to a number of human diseases, so the researchers sought to discover and define CNVs that may be related to arsenic susceptibility.

They found CNVs, specifically stretches of DNA deletions, in eight genes associated with higher risk for development of skin lesions. Depending on the gene that the deletion involved, people with CNVs were 1.67 to 2.15 times as likely to develop arsenic-induced skin lesions.

They also identified a relationship between development of arsenic-induced skin lesions and long intervening non-coding RNA (lincRNA), RNA molecules longer than 200 nucleotides that do not encode proteins. The presence of DNA deletions in three lincRNA genes was associated with increased risk. Many of the functions of lincRNA are still unknown, and this is the first study to identify a possible relationship between lincRNA and an arsenic-induced health outcome.

Identifying Differences in Susceptibility Based on CNVs and Other Factors 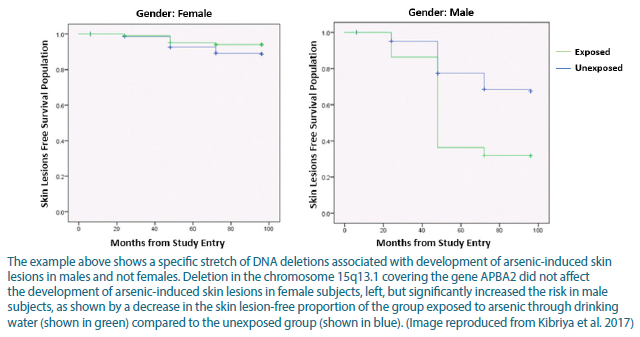 Since HEALS was established in 2000, researchers have recruited more than 35,000 men and women in Bangladesh and have collected individual-level data on arsenic exposure from drinking water and health outcomes. They also have collected blood samples to identify a variety of biological differences that may be associated with disease susceptibility.

For example, in another recent study, SRP-funded researchers and colleagues identified a link between short telomeres and increased mortality in HEALS and other Bangladesh cohorts. Telomeres are DNA sequences at the end of chromosomes that protect them from damage. This association had not been previously tested in people outside of Europe and the United States. As a result, the study provides compelling evidence that the association between telomere length and mortality observed in prior studies is generalizable to a rural South Asian population with substantially different exposures, lifestyle profiles, and genetic background.

HEALS researchers continue to follow up with participants biennially. Along with studying the health effects of arsenic, HEALS also provides participants in Bangladesh with basic primary medical care.