Identifying the Most Relevant Biomarkers

By identifying and prioritizing a few key biomarkers, the team aimed to reduce complexity in traditional toxicity screening methods, which are costly and time-consuming. Biomarkers are molecules - such as proteins, genes, or hormones - that indicate biological changes in cells and are used to measure the presence or progress of disease.

Researchers conducted two case studies to test whether their identified biomarkers could predict health outcomes. The first focused on biomarkers of cancer in rodents, and the second looked at genetic toxicity in bacteria. In both case studies, the most widely used biomarkers by government agencies, such as the National Toxicology Program (NTP), were tested to evaluate the ability of chemicals to cause genetic changes that may lead to cancer.

For each case study, they used data on six concentrations of 13 chemicals reported to cause cancer and a control group of 7 chemicals that do not cause cancer. A computational approach was used to evaluate a library of 38 proteins involved in DNA damage and repair activities. Changes to these proteins can lead to severe DNA damage and to mutations in genes that increase the likelihood of tumor formation and diseases, such as cancer.

The researchers measured changes in the expression of 38 proteins in response to chemicals and ranked them to identify the ones that were most useful for predicting outcomes in animal studies.
(Image adapted from Rahman et al., 2022)

Using an algorithm called maximum relevance minimum redundancy, they selected which biomarkers were more closely associated with carcinogenic chemicals, such as formaldehyde and benzo[a]pyrene. Then, they narrowed down the list by identifying which biomarkers were redundant, associated with the same chemicals and biological mechanisms. Removing redundant biomarkers allowed the researchers to decrease the size and complexity of their database.

This approach identified five out of the 38 proteins, NTG2, RAD34, RAD27, MSH2, and YKU70, as the most relevant biomarkers in rodents, and APN2, RFA2, NTG2, RAD2, and MSH6 as the best predictive markers for genetic toxicology studies using bacteria. 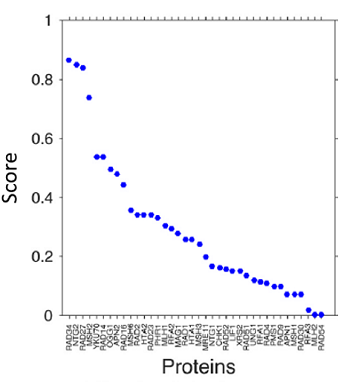 Scores of the biomarkers based on maximum relevance. The higher the score, the more important the biomarker is.
(Image adapted from Rahman et al., 2022)

To assess the performance of these biomarkers to predict carcinogenic and genetic toxicity they applied a classification algorithm, called support vector machine to the case studies. Compared to other classification algorithms, this approach can reliably classify chemicals while avoiding overfitting and reducing susceptibility to noisy or meaningless data. Overfitting is an error that occurs when the machine learning model is too closely related to the dataset, and therefore loses its applicability to any other dataset.

Using only the top five biomarkers, the team reported 76% accuracy in classifying and predicting chemicals that cause cancer in rodents and 70% accuracy in predicting genetic toxicity in bacteria. When all 38 proteins were included in the prediction model, the accuracy was increased to 83% for the rodent case study and 78% for bacteria.

According to the authors, although the full library of biomarkers may yield slightly better prediction scores, the top-ranked five biomarkers can achieve relatively high prediction accuracy while reducing the cost, time, and complexity of screening chemicals for further study.

Their findings have important implications for achieving the goals of the Tox21 initiative, a federal collaboration that is developing alternative, non-animal methods to quickly and efficiently test thousands of chemicals for potential health effects.