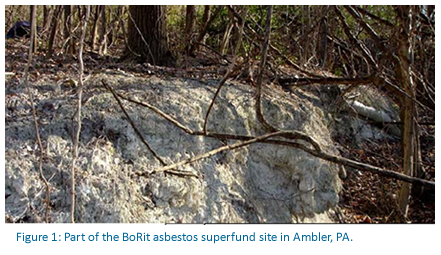 The University of Pennsylvania (Penn) Superfund Research Program (SRP) Center is driven by community-based concerns of asbestos hazardous waste. The Penn SRP Center arose because of the interaction of Penn's Environmental Health Sciences Core Center [Center of Excellence in Environmental Toxicology (CEET)] Community Outreach and Engagement Core (COEC) with the local community in Ambler, Penn., who lives close to one of the largest asbestos Superfund sites in the country. This resulted in the development of the environmental science and biomedical research projects in direct response to concerns from the local community. The highly interactive projects then formed the basis for establishing the Penn SRP Center as another component of Penn's CEET.

The Penn SRP Center fosters problem-based, solution-oriented research related to the theme of asbestos fate, exposure, remediation, and adverse health effects. This research has relevance to both the SRP sister Superfund agencies - US Environmental Protection Agency (EPA) and the Agency for Toxic Substances and Disease Registry (ATSDR). In view of the focus on biomarkers for personalization of asbestos risk, and their potential use to improve human health in the community, Trevor Penning, Ph.D., as Director of the CEET invited Ian Blair, Ph.D., (who is currently Director of the CEET Translational Biomarker Core) to become Director of the Penn SRP Center. Thus, formation of this new Center serves to highlight how NIEHS Core Centers can engage their local communities and lead to creative and significant large scale interdisciplinary research opportunities.

The community of primary interest to the Penn SRP is surrounded and potentially impacted by the BoRit EPA region 3 Superfund site, which is located in the Ambler Borough, Upper Dublin, and Whitpain townships in Pennsylvania (Figure 1). This community has a long history of impact from hazardous asbestos waste and the waste disposal site is proximate to at least two very different types of communities: the relatively poor communities of West Ambler (predominantly African American) and South Ambler (Italian immigrant), which adjoin the site, raising issues of environmental justice. The asbestos fiber used was predominantly chrysotile, the fiber which is considered to be a major cause of mesothelioma in the US. It is of significant concern in Ambler (Figure 2a), where the BoRit site is located, and where a cluster of mesotheliomas has been observed (Figure 2B). 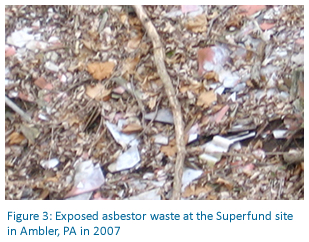 England's largest asbestos company, Turner Newhall, Ltd. manufactured asbestos textiles and products in Ambler from 1934 to 1962. Asbestos-containing waste from the plant was dumped in several surrounding areas, a practice that continued when CertainTeed Corporation and Nicolet Industries took over in 1962. CertainTeed ceased operations in 1974 and Nicolet in approximately 1988. Site remediation by the EPA under the Superfund program began in 1993. This remediation has involved capping the asbestos piles, adding a soil layer and hydroseeding. However, three other contaminated sites, in total about 32 acres and up to 42 feet deep, collectively known as the BoRit Site, and the abandoned plant site itself continue to present an unremediated hazard. The BoRit site was added to the EPA's National Priorities List of most hazardous waste sites on April 9, 2009, making it eligible for cleanup, using federal Superfund program funding. Despite cleanup efforts there is considerable residual community concern about the effectiveness of the remediation and the health effects of potential exposure to chrysotile asbestos. The sheer size of the asbestos waste material deposit, ~ 1.5 million cubic yards of contaminated waste, poses great difficulties for remediation. Removal would likely involve great potential for exposures from the remediation activities and local truck movements: one calculation puts this at the equivalent of one large truckload being transported from the area every 25 minutes for the next 10 years. Exposed asbestos waste was observed at Ambler in 2007 (Figures 1 and 3) and as recently as July 2012, concrete mats were installed along the creek bed at Rose Valley Creek next to the BoRit asbestos site because of damage that occurred as a result of Tropical Storm Lee in September 2011.

Furthermore, virtually nothing is known about the potential transport of asbestos fibers through these containment structures under normal circumstances, which is a significant component of the environmental science research being conducted in Penn SRP Center. Approximately 6,000 people live within a ½ mile radius of the BoRit site the nearest residence is within 200 feet of one of the piles and approximately 40 residences are located within ¼ of a mile. Consequently, there are substantial public health concerns for this population.