The Metals Exposure Study in Homes (MESH) has collected data from 34 homes near the Iron King Mine and Humboldt Smelter Superfund Site (the Site). These homes provided information to help the research team better understand the exposures of community residents, particularly children ages 1-11 years, to metal(loid)s. Gandolfi and his research team have found that arsenic levels in soil, water, and house dust are elevated, compared to guideline levels set by the U.S. Environmental Protection Agency (US EPA). In addition, arsenic levels in children's urine showed that exposures were higher than average, when compared to the general population of children ages 6-11, based on the National Health Assessment and Nutrition Examination Survey. This indicates that arsenic in water and house dust may influence the exposures of the children in this community (Figure 1). The MESH team has reported results to each household by mail and phone. Households with environmental or biological levels that exceed guidelines were specifically notified of this and potential interventions were suggested where possible. MESH has formed a partnership with government agencies working around the Site, including US EPA, ATSDR, Arizona Department of Health Services, and Arizona Department of Environmental Quality. This partnership improves and enhances the research team's ability to respond to community concerns about exposures and potential health effects. The researchers have worked with the Research Translation Core and ATSDR to create informational materials on arsenic in drinking water which is a common issue in the area. In the past year, researchers have demonstrated that passive dust fall samplers provided realistic estimates of metal concentrations in the air of MESH homes (Beamer et al., 2014; Emerging Investigators Special Issue). 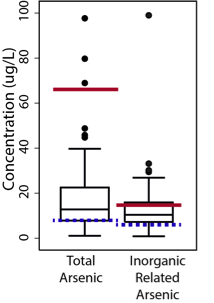 Gandolfi and his researchers have demonstrated that there is high correlation in arsenic concentrations between soil, dust, water, and dust fall samples obtained in MESH homes. Similarly, arsenic concentration in children's urine is strongly associated with arsenic concentrations in soil, dust, and water (Table 1). A publication is currently in preparation to be submitted in Winter 2015. Also within the last year, colleagues at the Arizona Respiratory Center determined that diminished Club cell secretory protein (CC16) levels by age 5 or 6 were associated with reduced lung function in the teenage years in 3 independent longitudinal birth cohorts. CC16 levels in urine from MESH children have a negative correlation with arsenic levels in multiple media (Table 1). Because of the strong associations between diminished CC16 levels in children and future respiratory health in adulthood, CC16 may be a useful biomarker for assessing potential health risks from arsenic exposure. This work is part of the preliminary data for a P50 Children's Center application, submitted in December 2014, focused on children's respiratory health and arsenic exposure, and the research team is currently preparing a related manuscript. The team has taken advantage of the MESH study to assess the prevalence of home water treatment in this rural population. Although, home water treatment is on the rise in the United States, it is not known what distribution of the population uses these methods, and if they are effective. In the MESH population, researchers have demonstrated that the majority of the population, whether on private well or municipal water, uses at least one method (i.e., reverse osmosis, activated carbon or water softener). Families with higher education and/or income were significantly more likely to adopt these practices independent of their source water quality.