Learn More About the Grantee 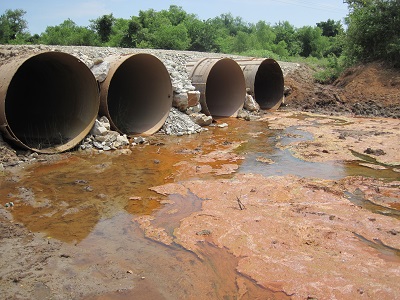 In year 2012, Dr. Shine and his research team found that metal bioaccessibility in soils manifests the combined effects of metal mineralogical composition and soil properties. Moreover, the interaction between metal minerals and soil components are both metal-dependent and mineral-type-dependent. The presence of ferrihydrite made metal sulfides become more bioaccessible in gastric fluid. With respect to humic acid additions, the results indicated that humic acid facilitated partial dissolution of oxidized metal minerals, therefore altering bioaccessibility.

A redox reaction between ferrihydrite and metal sulfides was revealed as the reason for the observed increase of metal sulfides bioaccessibility after ferrihydrite treatment. In the redox reaction, the metals are released into solution and Fe(II) and sulphate ion become the major species for iron and sulfur, respectively. Shortly afterwards, Fe(II) reacts with dissolved sulfide to form FeS or oxidizes back to Fe (III) quickly and co-precipitates with other elements. This redox reaction between metal sulfides and ferrihydrite might preferentially be accelerated in acidic aqueous environments. In addition, the researchers performed geochemical modeling using the PHREEQC software and the simulation results confirmed their hypothesis concerning the substantial increase of metal sulfide bioaccessibility after ferrihydrite amendment. 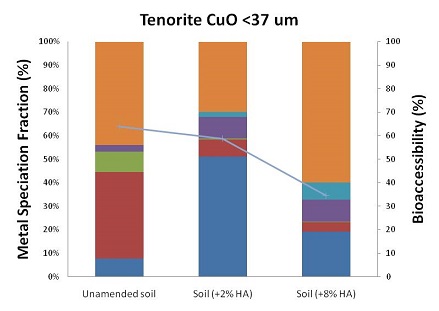 In order to determine the effect of time/weathering on changes in speciation and bioaccessibility, spiked soil samples (<37um size fraction, without additional treatment) were placed in columns (see Figure 2). Simulated moderately hard freshwater was introduced into the column from the bottom by a multi-channel peristaltic pump. Effluent coming from each column was analyzed monthly using ICP-MS. After the experiment, the soil inside the column was taken out and air-dried. Sequential extractions and Simplified Bioaccessibility Extraction Test (SBET) extractions were then conducted on the samples. As of November 2012, time points for one month and two months of aging have been collected and analyzed. In 2013, the one-year long weathering experiments have been finished and all data have been collected. Project researchers observed three kinds of temporal trends of metal bioaccessibility change for different categories of metal minerals: sharp increase, inverted-U shape and flat shape (see Figure 3). For each category of metal minerals, they proved that metal redistribution among various soil phase fractions over time leads to the corresponding change of metal bioaccessibility. Moreover, they have built empirical models to conduct future metal risk characterizations. 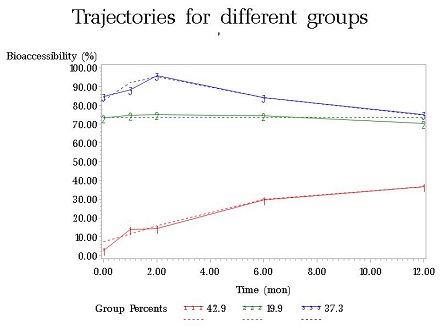 
The researchers analyzed field collected soil samples for Zn and Pb (along with model compounds) using extended X-ray absorption fine structure (EXAFS) at beamline 2-3 and 4-1. They used the Pb speciation determined by EXAFS to predict Pb bioaccessibility in field soils compared with the measured Pb bioaccessibility. Generally the Pb speciation determined by EXAFS and sequential extraction techniques agree with each other.

Pb speciation in the four selected yard soils determined by EXAFS shows that Pb was heterogeneously distributed within the soil samples. Oxidized Pb forms (PbO) constituted 30-60% of total Pb content in yard soils and other common Pb forms include lead sulfide (PbS), lead associated with hydrous iron oxides (Pb-Fh), lead associated with soil organic matter (Pb-OM), and pyromorphite (Pb5(PO4)3Cl). Given the determined metal species and the known bioaccessibility of each identified pure-phase Pb minerals from the pure phase mineral experiment, Pb bioaccessibility in these four yard soil samples was calculated. As Figure 4 shows, the predicted bioaccessibility was congruent with the measured value. The overall good prediction from EXAFS experiments further confirmed that the observed metal bioaccessibility is predominantly determined by the underlying metal geochemical forms present in soil. And subsequently, any changes of metal bioaccessibility is highly likely driven by metal geochemical reaction in soil. 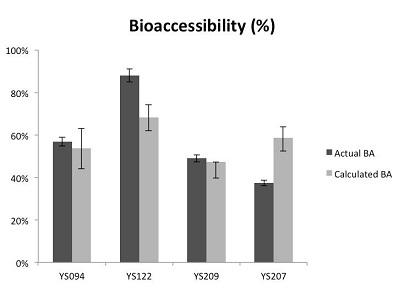 The specific research objectives of this project are to incorporate knowledge of the biogechemical cycling of metals into the risk assessment process, specifically with respect to human oral ingestion of metal contaminated soils. Current risk assessment techniques do not draw upon knowledge of the geochemical cycling of metals in soils. By incorporating current geochemical techniques, the researchers aim to improve their ability to understand the factors affecting the bioaccessibility of metals in soils. In particular, they hope to develop models that can model time variant changes in bioaccessibility (and therefore risks) for metals in soils.