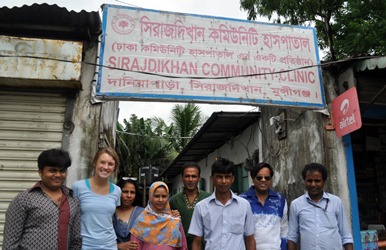 Figure 1: Kelsey Gleason with the team of investigators at the sirajdikhan community clinic during her sampeling trip. (Photo courtesy of Harvard)

In October 2013 project researchers completed enrollment and evaluation of children in their new cohort in Bangladesh. Since study inception in May 2011, the researchers have enrolled 988 children, and 827 of which underwent Bayley testing when they were between 20 and 40 months old. The researchers have completed scoring and quality assurance of the neurodevelopmental assessments. Environmental and biological samples were sent to Boston in January 2014 and the researchers are now beginning the analyses of these samples. 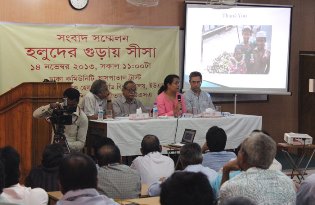 Figure 2: Maitreyi Mazumdar, Ph.D., and the DCH team answer questions about the study at the press conference on lead in turmeric powder. (Photo courtesy of Harvard)

With project collaborators in Bangladesh at Dhaka Community Hospital, the researchers visited homes, markets and workplaces to collect environmental samples (including food, water, soil, paint, and dust) in order to identify sources of lead exposure. Trainee Kelsey Gleason, led the field work (see Figure 1). Of 18 turmeric samples from children's homes, some had extremely high lead concentrations--as high as 480 parts per million. According to Dhaka's Daily Star newspaper, the permissible level of lead in turmeric set by Bangladeshi agencies is 2.5 parts per million. These findings coincided with the US FDA's recall of certain brands of turmeric imported to the US from Bangladesh because of high lead. In order to address concerns of the community, Dr. Maitreyi Mazumdar and DCH staff held a press conference in November 2013 in Dhaka (Figures 2 and 3). Kelsey is still in the process of analyzing the other environmental samples. 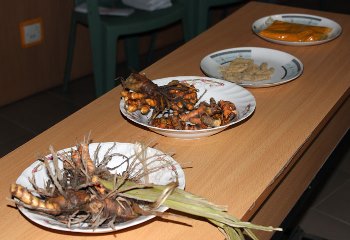 Figure 3: Different forms of turmeric were presented at the press conference (from left to right): root with stalks, raw root, dried root, and ground for spice distribution. (Photo courtesy of Harvard)

With respect to Mexico and Tar Creek, as of January 2013, the researchers have seen 752 children by age 24 months for a Bayley scale assessment in Mexico and 250 for IQ/Behavior testing at age 4-5 years. The Tar Creek site has performed 375 Bayley scales and over 150 IQ/Behavior assessments in older children. Dr. Robert Wright's laboratory is now assessing additional metals, which the researchers plan to add to their research project. Together with the Optimizing Sampling and Statistical Analysis for Hazardous Waste Site Assessment project (Project Leader Dr. Brent Coull) the researchers have developed newer methods to analyze data on "mixtures". These methods create a single vector that represents the various metals and lets us estimate the contribution of each chemical to the mixtures effect. The technique used is called Bayesian Kernel Machine Regression.

Project researchers believe this breakthrough will be a major advance in the field of chemical mixtures. Their Kernel regression will also give them a stronger link to the Genetic Epidemiology of Neurodevelopmental Metal Toxicity project, as the researchers can now provide a single parameter that represents the mixture effect and that parameter can now be used to test gene by "mixture" effects in that study, a process that was impossible prior to this statistical breakthrough. 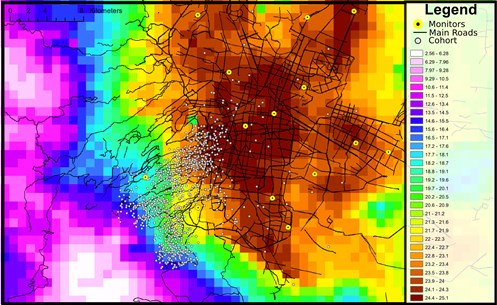 Project researchers continue monthly database meetings to organize the pooled dataset across the three cohorts and the associated meta-data needed to conduct the analysis. They last met with their External Advisory Board (EAB) in January 2014. Their current plan is to meta-regress results across the three cohorts, a process similar to meta-analysis. In an additional collaboration with the Optimizing Sampling and Statistical Analysis for Hazardous Waste Site Assessment project, the group was able to develop a model of air pollution in Mexico City (see Figure 4). The significance of this is that metals are a major constituent of air pollution and this work is the first step in estimating the contribution of air borne metals to internal dose and ultimately to their neurotoxicity. Of note in the figure, the project cohort lives in the southwest (lower left) corner of Mexico City. Dr. Allan Just, a postdoctoral fellow under Dr. Wright, created the satellite model under the direction of Dr. Brent Coull and Dr. Joel Schwartz. The researchers plan to place monitors that can assess air metals strategically around the community to assess the contribution of metals to PM 2.5 as the next step.

Another sign of the projects progress is the career trajectory of it's trainees. Dr. Allan Just, who developed the air pollution model previously discussed, was recently awarded a K99/R00 grant from NIEHS- 1K99ES023450 Prenatal Exposure to Endocrine Disrupters, DNA Methylation, and Childhood Obesity. In addition, Dr. Birgit Claus-Henn also received a K99/R00 for her work on Metal Mixtures in this project and the Optimizing Sampling and Statistical Analysis for Hazardous Waste Site Assessment project (1K99ES022986-01; Metal Mixtures, Children's Cognition, And Sensitive Developmental Windows). The researchers are also excited to report that Dr. Maitreyi Mazumdar and Dr. David Christiani received a pilot grant from the Harvard University Center for the Environment (HUCE) to investigate the association between arsenic and cystic fibrosis in Bangladesh. These awards highlight that project's research is making major advances in the emerging field of chemical mixtures.