Complex mixtures of polycyclic aromatic hydrocarbons (PAHs) are among the most common carcinogens to which humans are exposed. Although the mechanism (formation of DNA adducts) through which PAHs induce cancer is clearly understood, limited data are available to define the impact of mixture components on absorption, distribution, metabolism and excretion. The Genotoxicity of Complex Mixtures project has integrated cell culture, animal and human studies to investigate the interactions of PAH mixtures. Studies using hepatic cells in culture treated with benzo(a)pyrene (BaP) indicated that reduced CYP1A1 coupled with increased GSTM1 expression significantly decreased benzo(a)pyrene (BaP) induced DNA adducts. The results from animal studies indicate that a number of factors may alter the ability of a complex mixture to induce cancer.

In this study Dr. Donnelly and his reserach team used three doses (high, medium, and low) of a reconstituted PAH mixture, a neutral fraction (NF) of PAH plus BaP, and BaP alone to investigate their effects on DNA adduct formation (relative adduct levels (RAL) x10-9 nucleotides) and percent mice with tumors. The effects of BaP and the mixtures on these parameters were surprising (Figure 1.) At the lowest doses of the PAHs, DNA adduct levels were inversely correlated with percent mice tumors; at the highest dose there was a strong positive correlation between levels of DNA adducts and percent mice with tumors. 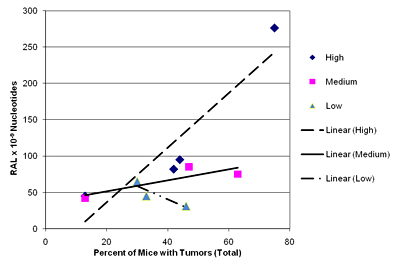 Figure 1. Formation of DNA adducts versus Percent Mice with Tumors.

These results show that formation of DNA adducts is directly correlated with tumor formation at higher dose levels once DNA repair and detoxification pathways are overwhelmed. Similar mechanisms may explain why older populations are more likely to develop cancer. Case control studies being conducted in Shanxi, China in collaboration with Dr. Mitchell (Environmental Determinants of Neural Tube Defect Risk project) and Dr. Finnell (Sensitive Genotypes project) are investigating biomarkers of exposure and genetic sensitivity in the parents of children born with neural tube defects (NTDs). Parents of children born with no visible birth defect and conceived at approximately the same time as case children were used as controls. Concentrations of total and carcinogenic PAHs were significantly increased in serum from cases when compared with the controls. The mean level of EPA Class B2 carcinogens was found to be more than three-fold higher in serum from case parents than in controls.