Research Brief 334: Disentangling Relationships Between Arsenic and the Gut Microbiome

Disentangling Relationships Between Arsenic and the Gut Microbiome

Using an innovative method to simulate the gastrointestinal (GI) system, an NIEHS Superfund Research Program (SRP)-funded study revealed the interplay between arsenic exposure and the gut microbiome. The scientists assessed how arsenic alters the microbiome and how much arsenic can be dissolved into the bloodstream after being broken down by the gut, also known as bioaccessibility.

Arsenic can be found in food, soils, sediments, and groundwater. While food and water are the most common routes of exposure, children can ingest arsenic-contaminated soils through frequent hand-to mouth activity. Researchers know that arsenic exposure can disrupt the microorganisms living in the gut and that gut microbes can affect arsenic bioaccessibility and potential toxicity, but little is known about the complex relationship between arsenic exposure, the gut microbiome, and arsenic bioaccessibility.

Exploring Arsenic in a Realistic Model of the GI System

The simulated GI system, developed by former UNC SRP Center trainee Jennifer Griggs, Ph.D., includes compartments that represent the stomach, small intestine, and colon. The team added microorganisms from mouse feces or the intestines to create a realistic microbiome. Then they exposed the system to arsenic contaminated soils from four different sites compared to a laboratory standard.

The team tracked changes in microbial DNA expression and in species richness and diversity to explore how arsenic exposure affected the gut microbiome. Because their approach can’t mimic the absorption of arsenic into the blood, they assessed how the different GI compartments broke down arsenic into a dissolved form as a surrogate for the amount that is bioaccessible. Finally, they compared their bioaccessibility data to a validated EPA test.

Relationship between Arsenic and the Gut Microbiome

While arsenic exposure did not affect fecal bacteria, it did reduce and eliminate multiple genera of intestinal bacteria, particularly members of Clostridiaceae, Rikenellaceae, and Parabacteroides, bacteria known to be critically involved in metabolic regulation. The researchers explained that intestinal bacteria, which appear to be more sensitive to arsenic, are more diverse and better represent the GI microbiome, highlighting the potential for far-reaching effects on human health.

They also found differences in how much arsenic was dissolved in each GI compartment by soil type. Specifically, arsenic bioaccessibility was highest in the stomach exposed to the standard arsenic contaminated soil. The authors note that the highly acidic environment may contribute to the increased bioaccessibility, but that site-specific soil properties are also important, as lower than expected amounts of arsenic dissolved in the stomach compartment for the other arsenic contaminated soils. 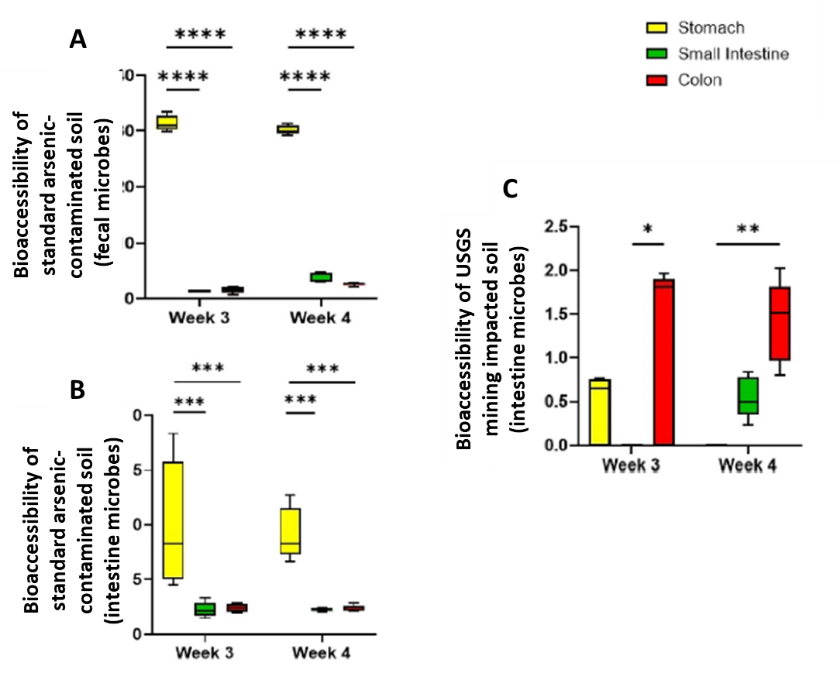 Arsenic bioaccessibility was greatest in the acidic stomach phase following exposure to standard arsenic-contaminated soil (A and B). In the colon phase, bioaccessibility of arsenic from EPA reference soil was elevated, which the researchers attribute to microbial activity (C).
(Image adapted from Griggs et al., 2022, Environ Pollution)

Interestingly, the team did not identify any effects on arsenic bioaccessibility that could be attributed to changes in microbial diversity and composition, except in the colon. In that compartment, the team found higher levels of bioaccessibility following exposure to an EPA reference material soil contaminated with arsenic, which they attributed to microbiome effects. According to the researchers, the microorganisms' effect on bioaccessibility may be dependent on the physical and chemical properties of the soil as well as the specific microbiome composition.