A new Superfund Research Program (SRP) study explains how particulate matter (PM) containing environmentally persistent free radicals (EPFRs) activate the aryl hydrocarbon receptor (AhR). AhR is known to play an important role in detecting and responding to a variety of pollutants. These findings could prove useful in understanding the underlying mechanism of diseases known to be associated with inhalation of PM, such as cardiovascular disease.

EPFRs can be formed during incomplete combustion and have been shown to produce reactive oxygen species (ROS), which are highly reactive molecules with the ability to oxidize cell structures and biomolecules, causing DNA damage or other damage to cells. When inhaled, EPFRs also have been linked to inflammation and oxidative stress in the lungs. This is the first study to propose an underlying mechanism of the respiratory toxicity of EPFRs.

The team, led by Tammy Dugas, Ph.D., and Stephania Cormier, Ph.D., at the Louisiana State University SRP Center, treated human bronchial epithelial cells, those found in the airway leading to the lungs, with EPFR-containing PM and measured the amount of ROS created. They also measured AhR activation and cytokines produced by the cells, which are important in immune system signaling and are usually associated with inflammation. 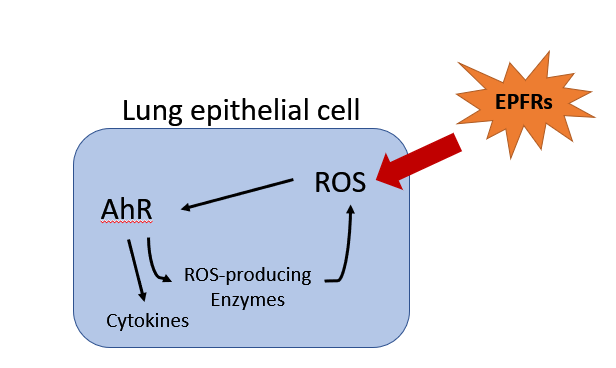 They found that EPFR exposure increased ROS production and AhR activation in bronchial epithelial cells, which was also associated with an increase in ROS-producing enzymes. AhR activation in turn stimulated the creation of cytokines.

To explore further how EPFR leads to increased cytokines, the researchers looked at cells treated with an antioxidant or a compound that interferes with AhR activation. Surprisingly, the team found that AhR activation was dramatically reduced with either treatment. According to the authors, these findings suggest AhR activation is responsible for only a fraction of the total ROS produced by EPFR exposure, and ROS are likely both a cause and an effect of AhR activation.

Next, the team explored whether EPFRs had to be taken up by the cells in order to activate AhR. They found that AhR activation did not require EPFR particle uptake into the cells. Thus, the authors suggest it is unlikely that the particle itself is responsible for activating AhR and that EPFRs may induce oxidation of lipids or proteins on the cell surface, which in turn promotes AhR activation within the cell.