New research out of the University of Iowa Superfund Research Program (SRP) Center identified specific cytochrome P450 (CYP) enzymes and underlying mechanisms involved in the breakdown, or metabolism, of polychlorinated biphenyls (PCBs) into compounds that may be more toxic. PCBs are a large and complex group of chemicals that often occur in mixtures and can contaminate soil, groundwater, and air. Exposure to PCBs has been linked to a range of health impacts, including metabolic diseases, developmental neurotoxicity, and cancer. 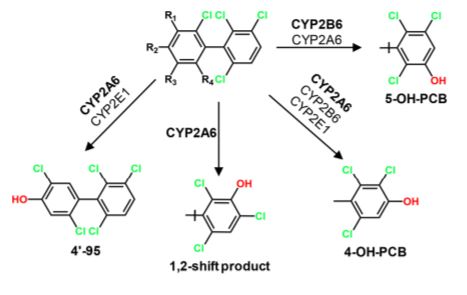 CYP enzymes play a role in metabolizing many different chemicals, including those that occur naturally within the body, pharmaceuticals, and potentially harmful pollutants. While there are thousands of CYP enzymes, humans have about fifty variants. Several larger classes of CYP enzymes, CYP1A, CYP2A, and CYP2B, are known to break down some PCBs, but the process is not well studied. The team, led by Hans-Joachim Lehmler, Ph.D., and Eric Uwimana, Ph.D., an Iowa SRP Center graduate student at the time, used a series of experiments to uncover more information about this important process that has implications for how PCBs may harm human health.

The team used computer-based methods to predict which CYP enzymes are most likely to be involved in metabolizing PCBs into hydroxylated PCBs (OH-PCBs), wherein an oxygen atom is inserted at one of several possible locations in the chemical structure. Previous studies have identified health effects of OH-PCBs, including their potential toxicity to the developing brain. Looking at nine different forms of the CYP enzyme and four specific PCB chemicals, they used two advanced computer software techniques to make predictions based on information about the chemical structure and specific chemical reactions that may be involved in chemical breakdown.

While the two computer approaches varied in their predictions, overall the software suggested that CYP1A2, CYP2A6, CYP2B6, CYP2E1, and CYP2A4 play a role in PCB metabolism. The authors note that CYP1A1 and CYP2B enzymes tend to break down PCBs in animals, such as rodents. This information was used to inform their more complex studies using human CYP enzymes and human liver microsomes, a specific part of the liver cell where PCB breakdown is known to occur.

A Closer Look at CYP Enzymes

To confirm whether the predicted CYP enzymes play a role in the metabolism of PCBs to OH-PCBs in humans, the team used human CYP1A2, CYP2A6, CYP2B6, CYP2E1, and CYP2A4 to test their metabolism of the same four PCB chemicals used in the computer simulation.

They found that OH-PCBs were detected only in tests with CYP2A6, CYP2B6, and CYP2EA, indicating that the other predicted CYP enzymes do not hydroxylate PCBs. According to the authors, the computer-based approach was relatively poor at predicting the metabolism of PCBs, but it was able to identify some of the major CYP enzymes involved.

Through these experiments, the team identified which OH-PCB metabolites were formed by each CYP enzyme and their relative abundance for each PCB chemical. They also determined specific chemical reactions by which CYP enzymes metabolized PCBs to OH-PCBs and where on the chemical structure the oxygen atom is incorporated.

In general, the authors reported that CYP2A6 played the largest role in the metabolism of PCBs to OH-PCBs, followed by CYP2B6 and CYP2E1. They also identified differences in the underlying mechanisms of hydroxylation of different PCBs by the same CYP enzyme and between the different CYP enzymes.

What Happens in the Human Body? 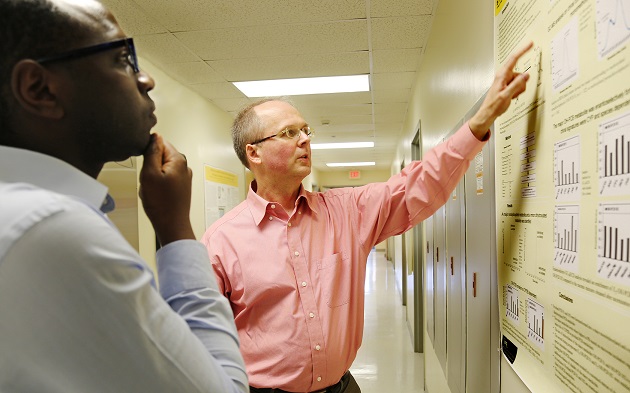 Lehmler, right, and Uwimana discuss their research on how PCBs are broken down into potentially more toxic compounds in the human body. (Photo courtesy of HansJoachim Lehmler)

To better understand how CYP2A6, CYP2B6, and CYP2EA contribute to PCB metabolism under more realistic conditions, the team compared the OH-PCB profiles formed in the experiments with CYP enzymes with OH-PCB profiles formed by human liver microsomes. Liver microsomes are the part of liver cells that contain mixtures of CYP enzymes and, therefore, more accurately represent the complex metabolism of chemicals in the human liver.

Overall, they reported that CYP2A6 is the primary enzyme involved in hydroxylating PCBs in human liver microsomes, followed by smaller contributions from CYP2B6 and CYP2E1. The authors point out that this is different from studies in rodents, where CYP2B enzymes play a larger role in PCB metabolism.

According to the authors, this study provides new insight into how PCBs are metabolized to potentially neurotoxic OH-PCBs in humans and contributes supporting evidence for observed differences between OH-PCB profiles in humans versus rodents. They suggest that future studies should include cutting-edge non-targeted metabolomic approaches to better understand the complex PCB metabolites formed in living organisms.