A sediment passive sampling model can be used to accurately predict the concentration of polycyclic aromatic hydrocarbons (PAHs) in butter clams, according to a recent Superfund Research Program (SRP) study.

PAHs are a large group of hazardous chemicals commonly found at Superfund sites and have been linked with health effects, including cancer. In Puget Sound, PAHs are found in the sediment where butter clams are harvested. Butter clams are an important food source and component of cultural practices for local tribes, but PAHs can accumulate in the edible portion, posing a health risk to the communities who rely on them.

Led by Kim Anderson, Ph.D., of the Oregon State University (OSU) SRP Center, the research team worked closely with tribal leaders to better predict PAH levels in butter clams while having a minimal impact on this important resource. 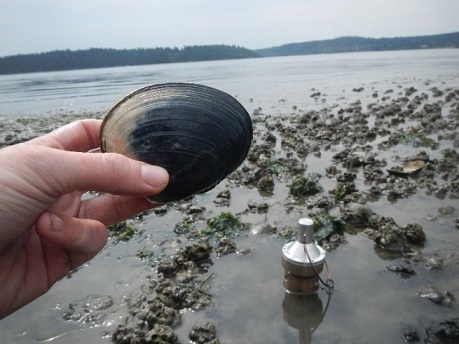 Traditional approaches to predict the levels of contaminants in sediment-dwelling organisms use measured total sediment concentrations and mathematically relate that to the amount that is likely to be readily taken up by the organism, a term known as bioavailability. According to the authors, this approach is not very accurate and tends to overestimate the amount of a chemical that will accumulate in animals by a factor of 10 to 44.

In contrast, the OSU team used sediment porewater passive samplers to measure freely dissolved PAHs, which may be a better indicator of bioavailability, accumulation, and toxicity for these organisms. Porewater is the water that exists between particles of soil and sediment. The researchers collected butter clams from four different tribal fishing sites selected by the community and placed their low-density polyethylene passive sampling devices (PSDs) in each of the empty clam holes for 29 days. 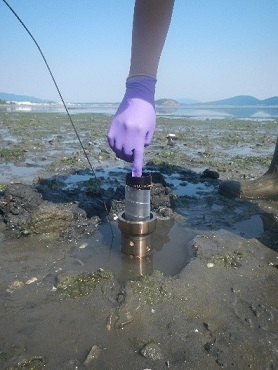 The passive sampling model developed by the OSU SRP team offers a sustainable, simple, and accurate approach to predict the concentration of PAHs in clams, the authors say. They argue that this tool is particularly important for assessing risk among Native American populations who consume more of these clams and other shellfish than the national average and, therefore, may be at greater risk for health impacts such as cancer.

Anderson and her team also have collaborated with the Swinomish Indian Tribal Community to use personal passive sampling wristbands that she developed with SRP and other NIEHS funding to measure exposure to PAHs from nearby oil refineries.

Through this community-based participatory research project, the team observed differences in PAH exposure for individuals who participated in different activities or lived at different distances from the refineries. At the end of the study, participants reported that they felt more aware about their potential exposure to PAHs from different sources and, in many cases, felt empowered to take steps to reduce their exposure.

The silicone wristbands can capture and measure a large number of diverse compounds at environmentally relevant concentrations and have been shown to more accurately capture exposures in the body compared to traditional air monitors. Using these simple devices, the OSU team and colleagues from other institutions recently discovered common chemical exposures across continents. They detected 191 unique chemicals in 262 individuals in four countries. While chemical exposures varied among individuals, many were exposed to similar chemical mixtures. According to the team, these wristbands have been incredibly useful in uncovering personal chemical exposure trends that may help prioritize certain mixtures and chemical classes for future studies.