Exposure to polychlorinated biphenyls (PCBs) affects glucose regulation during weight loss differently in male and female mice, according to a new Superfund Research Program (SRP) study. The researchers discovered that differences were related to the aryl hydrocarbon receptor (AhR), a protein involved in the regulation of various biological responses and cell maintenance in the body.

PCBs are a group of chemicals that were used for decades in insulation, coolants, and electrical equipment. Some PCBs, known as dioxin-like PCBs, share a structural similarity to chemicals known as dioxins, which can bind to the AhR. When that happens, the AhR can alter expression, or function, of certain genes leading to a disruption in normal cell function and ultimately adverse health effects. Although commercial production of PCBs was banned in the United States in 1979, they persist in the environment because of their stable chemical structure. 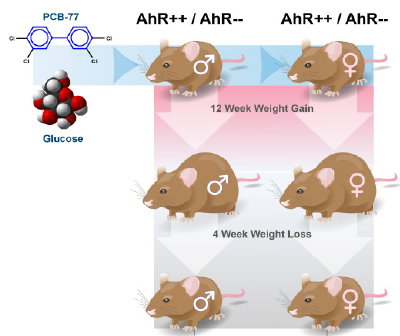 PCBs have been associated with glucose intolerance and insulin resistance, but the underlying mechanisms and sex differences seen in human populations are not clearly understood. To address this, researchers led by Lisa Cassis, Ph.D., at the University of Kentucky SRP Center compared the effects on male and female mice exposed to a dioxin-like PCB known as PCB-77, which is common in the environment and was previously shown to bind to the AhR. They measured changes in weight and the ability to maintain glucose homeostasis, or stable blood glucose levels.

Weight loss is generally linked to an improvement in glucose homeostasis. However, according to the authors, PCBs are stored in the expanded fat mass of obese subjects and can be released during weight loss. Thus, obese individuals with a high body burden of PCBs could see reduced improvements in glucose tolerance as the toxicant is released, blunting the health benefits associated with weight loss. The researchers explored how PCB-77 alters glucose tolerance during weight gain and subsequent weight loss, the role of AhR as a mediator of PCB’s effects, and how the results differ between males and females.

The researchers fed male and female mice a high-fat diet for 12 weeks, followed by a low-fat diet for 4 weeks to induce weight loss. They exposed some of the mice to PCB-77 during the weight gain period and compared them to mice who were not exposed. The researchers selected a dose comparable to levels observed in humans living near an old PCB production facility in Anniston, Alabama. They found that when fed a high-fat diet, PCB-exposed female mice were more resistant to becoming obese than PCB-exposed males. However, the lower body weight gain in those females did not translate into improvements in glucose tolerance.

During the weight-loss period, males who had been exposed to PCB-77 retained impaired glucose tolerance. This effect was not seen in PCB-exposed females, indicating that males may be less resistant to PCB-induced effects on glucose homeostasis during weight loss.

The Role of AhR Depends on Sex

To determine whether AhR was involved in the observed differences between sexes, the researchers compared male and female mice lacking AhR to normal mice and measured weight, glucose tolerance, and markers of insulin resistance.

In males, AhR deficiency reduced the effects of PCB-77 on impaired glucose tolerance during weight loss. In females, AhR deficiency had the opposite effect, increasing glucose intolerance in PCB-exposed mice. The researchers also measured insulin receptor activity, and their results suggested that AhR activation protected females, but not males, against changes to insulin resistance resulting from PCB exposure.

The results demonstrated that AhR plays a key role in differences between males and females in body weight regulation and glucose homeostasis in response to PCB exposure. According to the authors, both estrogen and testosterone interact with AhR, so future studies should address the role of sex hormones as potential mediators of these sex differences in AhR regulation.