Though the methods are generalizable to other research questions and study populations, the investigators’ efforts focused on residents of a low-income, urban community near the New Bedford Harbor Superfund site in New Bedford, Massachusetts. Because of their proximity to the Harbor and its industrial activities, as well as the prevalence of older housing, the community is more likely to be exposed to multiple chemicals and social stressors. These exposures include metals, polychlorinated biphenyls (PCBs), and stress associated with low income.

In one study, the BU SRP Center showed that they could overcome the difficulty and cost associated with collecting biological samples and measuring prenatal exposures for large populations by using measured exposures available for only a subset of a larger population.

Led by Veronica Vieira, D.Sc., a professor at the University of California, Irvine and a previous BU SRP project leader, and with lead author Roxana Khalili, a BU SRP trainee, the team used exposure measurements from previously collected biological samples, including cord blood and maternal hair, from the New Bedford Cohort (NBC). The NBC is an ongoing birth cohort study of nearly 800 mother-child pairs who lived in one of four towns adjacent to the New Bedford Harbor at the time of the child’s birth between 1993-1998. They linked the measured NBC exposure data with birth records and residential proximity to the Harbor and major roads to build predictive models that estimated prenatal exposure to PCBs, p,p’-dichlorodiphenyldichloroethylene (DDE), hexachlorobenzene (HCB), lead, and mercury for all of the births that occurred around the Harbor between 1993-1998. 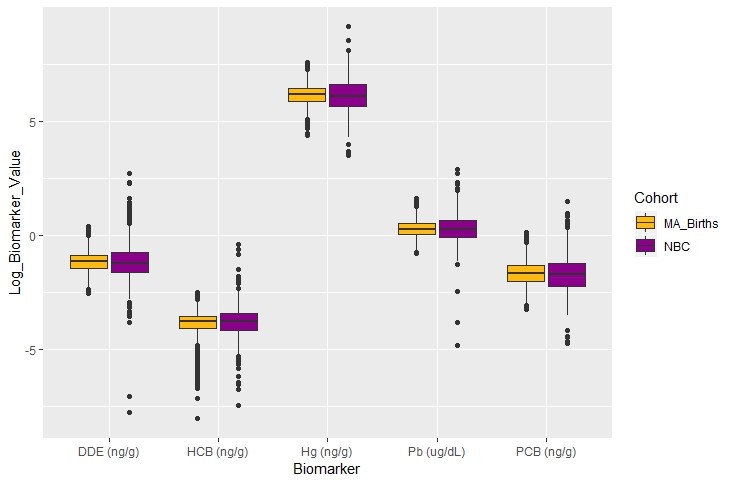 Their prenatal exposure predictions for all 10,270 births in the New Bedford Harbor area had similar distributions and variability to the measured exposures in the NBC during the same time period. They also identified key predictors of higher exposure levels. For example, maternal ancestry from the Azores or Portugal was significantly associated with higher predicted exposure for all chemicals except lead, which the authors suggested could be due to distinctive dietary patterns including fish intake or different patterns of exposure to certain contaminants when the mother was young. Higher exposures to some chemicals were also associated with lower parental education, which the authors identified as a proxy indicator of household socioeconomic status. Lastly, residential proximity to the coastline was associated with higher exposure to some chemicals, which the authors suggest may be due to potential exposure to coastal industrial activity or increased fish consumption.

According to the authors, this predictive modeling approach can leverage measured exposure data available from a small representative sample of a population to predict chemical exposures for the wider population and help identify subgroups that may be particularly susceptible to exposure to multiple chemicals.

In another study, researchers led by BU SRP project leader Jonathan Levy, Sc.D., with lead author Junenette Peters, Sc.D., developed and applied an approach to address challenges in quantifying the health benefits of different intervention scenarios. They showed how statistical models that simultaneously predict exposure to multiple chemical and nonchemical stressors and their combined effects on cardiovascular health can be used to quantify blood pressure improvements resulting from exposure reduction.

The team developed models using National Health and Nutrition Examination Survey (NHANES) data that evaluated the associations of both chemical exposures and sociodemographic predictors with blood pressure. They linked these models with their previously developed simulated data of New Bedford resident attributes. They then predicted each resident’s exposure to lead, cadmium, PCBs, and other factors, along with U.S. Census data such as education and income, and their resulting systolic and diastolic blood pressure.

They explored how hypothetical scenarios of reduced exposure levels, such as those at the lower end of the exposure distribution for NHANES, would change the blood pressure distribution in the community. The simulated New Bedford data allowed the team to look at both demographic and spatial patterns of benefits.

By jointly considering chemical and nonchemical exposures and accounting for interrelationships between multiple exposures, the researchers demonstrate an approach for evaluating public health effects of exposure reductions on blood pressure and hypertension. According to the authors, by leveraging publicly available datasets, these methods can be applied to other communities and to any health outcome, although they are more robust for continuous measures such as blood pressure.