Superfund Research Program (SRP) researchers have developed a sensitive and inexpensive carbon nanotube-based sensor that can measure N-nitrosamines in air. Classified as probable human carcinogens, N-nitrosamines are formed as by-products during rubber manufacturing, leather tanning, pesticide production, and various other industrial processes. They have been found widely in air, water, and food. 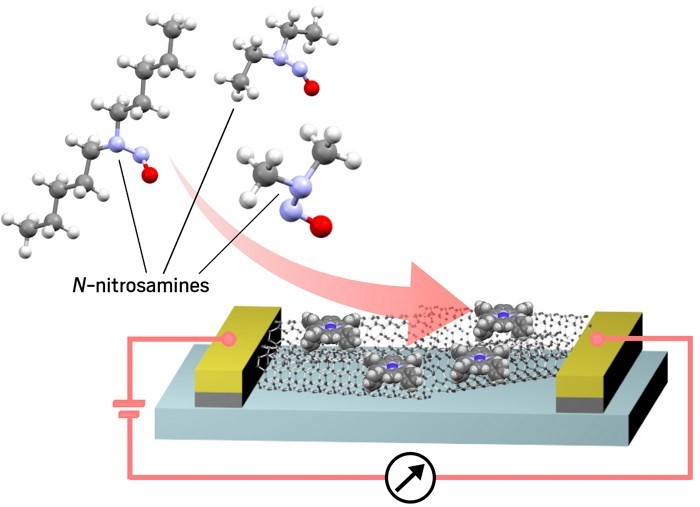 The sensor, which can detect N-nitrosamines in air, is made of cobalt (III) tetraphenylporphyrin molecules that are attached to carbon nanotubes stretched between gold electrodes. (Image from He et al. 2019, ACS Sensors)

Traditionally, detecting airborne N-nitrosamines has required air collection by trapping it within a solid sorbent or liquid solution and then shipping the materials to a testing facility. Lab technicians then extract compounds from the sample and test for the presence of N-nitrosamines using techniques such as liquid or gas chromatography/mass spectrometry. Although these techniques can detect very low levels of N-nitrosamines, they are slow, expensive, labor-intensive, and require sophisticated instrumentation.

The new sensor consists of cobalt (III) tetraphenylporphyrin molecules deposited onto single-walled carbon nanotubes. The carbon nanotubes are stretched between gold electrodes, which conduct current through the nanotubes. The cobalt (III) tetraphenylporphyrin molecules selectively bind to N-nitrosamine compounds floating by, which results in a change in electrical resistance across the electrodes that researchers can measure to determine N-nitrosamine concentration in air.

SRP researchers used N-nitrosodimethylamine (NDMA), the most common N-nitrosamine, to test the sensitivity of different functionalized molecules in the sensor. They determined that cobalt (III) tetraphenylporphyrin molecules led to the largest signal after exposure to NDMA vapor, so they selected this molecule for further sensor optimization.

They also tested to ensure that background humidity did not interfere with the sensor signal, which can be a problem for nanotube-based sensors. The device showed an 18-fold selectivity for NDMA over other compounds, such as ethanol and water, indicating that this method is sensitive to detecting NDMA without picking up other background signals.

The researchers then integrated the sensors with a sensing chip device, a pump that draws air into the sensing cartridge, and a processer that collects data and can report the readings in real time. They found that the sensor detected parts-per-billion levels of NDMA when hooked up to the real-time device and that the readings could be read remotely using a computer or smartphone.

According to Swager, the research team’s involvement in the MIT SRP Center has contributed to directing its focus to problems that impact human health, including reducing human exposure to N-nitrosamines. Moving forward, the research team aims to use the sensor and another method developed in its lab to detect and measure N-nitrosamines in water at polluted sites around Maine.