PAH and Hypoxia Exposure Result in Mitochondrial Dysfunction in Fish

Zebrafish exposed to polycyclic aromatic hydrocarbons (PAHs) in water with inadequate oxygen, or hypoxia, can experience a broad range of effects on the mitochondria, according to an NIEHS Superfund Research Program (SRP)-funded study. Changes to the function and integrity of mitochondria, which are organelles that make energy for the cell, can disrupt metabolism and reduce organism fitness and performance.

The researchers studied zebrafish in the embryonic stage, left, before they develop into larvae, top right, and later into adults, bottom right. (Images courtesy of Richard Di Giulio)

While the effects of both stressors individually on the metabolism and fitness of fish have been well-studied, less is known about effects when they are combined. Specifically, the researchers wanted to know whether combined exposures led to compounded effects on mitochondrial function and integrity.

Zebrafish embryos are transparent, which allows researchers to monitor development as it happens and to visualize the effects of chemical exposures and other stressors such as hypoxia.

Duke University SRP Center researchers led by trainee Casey Lindberg, Ph.D., and project leader Richard Di Giulio, Ph.D., found that both PAH and hypoxia exposures resulted in diverse effects on the mitochondria. However, they found little evidence of interactions between the two stressors that would further enhance mitochondrial dysfunction beyond effects from individual exposures. Despite little evidence of interactions, the findings provide insight into the toxicological mechanisms and consequences of exposures to both stressors.

The researchers placed zebrafish embryos in water with reduced oxygen levels, with an environmental PAH mixture, or with both conditions. They compared these embryos to controls in clean conditions.

The PAH mixture was obtained from creosote-contaminated sediment from the Atlantic Wood Industries Superfund site along the Elizabeth River in Virginia. Both the PAH levels in the mixture and the magnitude of the reduction in oxygen were lower than those known to cause birth defects in fish.

After 24 hours of exposure, zebrafish embryos were given either no recovery period or 45 minutes, 5 hours, or 18 hours of recovery time in clean conditions. The researchers then assessed mitochondrial function and integrity from the groups with individual and combined exposures compared to the control group.

They found that hypoxia exposures resulted in a range of mitochondrial effects, including drastic reductions in mitochondrial respiration, energy metabolism rates, and mitochondrial DNA integrity. 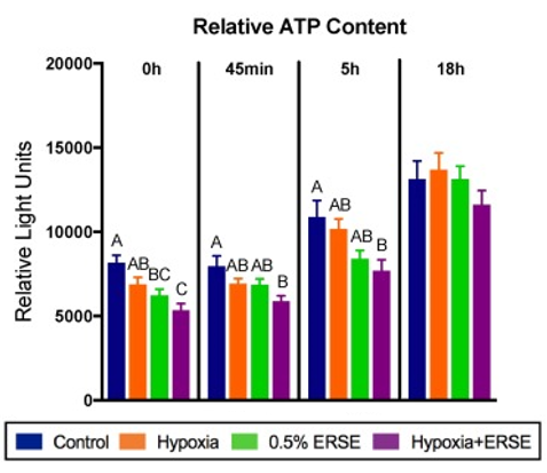 PAH exposures had more targeted effects on mitochondrial membrane dynamics, which affected production of adenosine triphosphate (ATP), an energy-rich molecule produced in the mitochondria. The levels of relative ATP content in each group supported additive effects of hypoxia and PAH co-exposures, as shown in the figure.

Effects caused by each individual stressor were seen in the co-exposure group, but the researchers did not observe interactions between the two stressors that would suggest exacerbated effects on mitochondrial function and integrity.

Interestingly, most of the effects observed from PAH exposures occurred during later stages in recovery, at 5 and 18 hours. The authors note that this may be due to PAH metabolism and that reactive PAH metabolites, rather than the original PAH compounds, may be driving the toxicity associated with decreases in ATP production.

The findings provide new information about the toxicological mechanisms related to mitochondrial dysfunction and loss of mitochondrial integrity underlying low-level exposures to PAHs and hypoxia. According to the authors, the effects from co-exposures may coincide rather than interact. The authors also note that hypoxia may cause such drastic changes in mitochondrial function that it affects how organisms respond to PAH mixtures.