High-Fiber Diet May Protect Against Harmful Health Effects of PCBs

Two new NIEHS-funded Superfund Research Program (SRP) studies showed how a type of dietary fiber, inulin, may protect against heart disease, including heart disease resulting from exposure to polychlorinated biphenyls (PCBs). Inulin is found in vegetables such as asparagus and onions. According to University of Kentucky SRP Center researchers, a diet high in inulin may reduce or modify certain lipids associated with an increased chance of developing cardiovascular problems and may protect against adverse cardiovascular effects caused by environmental toxicants, such as PCBs.

In the first study, researchers led by trainee Pan Deng, Ph.D., and Center Director Bernhard Hennig, Ph.D., used metabolic profiling to analyze the effects of dietary inulin on lipid levels in mice. Hennig’s lab examines how nutrients in the diet affect cardiometabolic toxicity caused by polychlorinated PCBs. Although PCBs were banned decades ago, they can still be released into the environment from hazardous waste sites and persist in the environment. In this study, the researchers examined the mechanisms involved in cardiometabolic toxicity from PCB exposure to see whether inulin could improve outcomes.

The team used mice lacking receptors for low-density lipoprotein (LDL) and fed them a high-fat diet supplemented with either inulin or a cellulose control. LDL-deficient mice do not adequately clear cholesterol from their blood, making them prone to high cholesterol and atherosclerosis, an inflammatory cardiovascular disease in which fat and cholesterol build up in the walls of arteries.

Inulin-fed mice had significantly lower levels of all five ceramides at 10 days, A, and three ceramides at 12 weeks, B. (Image from Deng et al., 2020, J Lipid Res)

At 10 days and 12 weeks, the researchers looked for differences in metabolites and lipids between the two groups.

Inulin significantly decreased the level of ceramides, waxy lipids associated with increased risk of cardiometabolic disease, measured at 10 days and at 12 weeks. Liver samples showed inulin also increased an essential phospholipid, cardiolipin, by more than 43%. Cardiolipin is an important component of mitochondria, which make energy for cells, and regulates several mitochondrial functions.

Drilling Down to Mechanisms

The researchers identified nearly 60 differentially expressed genes in inulin-fed mice compared to controls. One primary function modified by inulin was immune response, including a decrease in expression of genes related to inflammation.

They also found significant changes in genes related to lipid metabolism. One of the key genes identified was Smpd3, which had decreased expression in inulin-fed mice compared to controls. Smpd3 encodes for NSMase, an enzyme that plays an important role in the formation of ceramides. By measuring enzyme activity levels, the team confirmed that NSMase activity was reduced about four-fold in inulin fed-mice compared to controls. 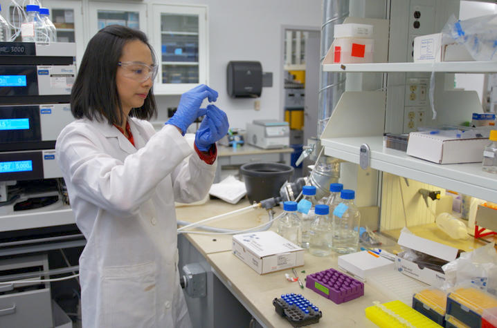 According to the authors, these results explain why inulin-fed mice had lower levels of ceramides. Because high ceramides have been associated with cardiovascular risk, the authors add that a high-fiber diet may protect against heart and metabolic diseases associated with environmental pollutants.

In the second study, led by trainee Jessie Hoffman, the Hennig lab recently confirmed that inulin reduced liver lipid accumulation, protected gut microbiota, and decreased atherosclerosis in mice exposed to PCB 126, pointing to potential nutritional interventions for people who are exposed to PCBs.