A new analytical workflow, developed by NIEHS Superfund Research Program (SRP) grantees, can identify and characterize previously undetected per- and polyfluoroalkyl (PFAS) compounds in contaminated watersheds. The team is led by Elsie Sunderland, Ph.D., of the University of Rhode Island SRP Center, and SRP trainee Bridger Ruyle, a doctoral student at Harvard.

To conduct their analysis, the researchers collected surface water samples from lakes and rivers in six coastal watersheds on Cape Cod, Massachusetts, three of which had known sources of aqueous film forming foams (AFFF) contamination. They found a combination of PFAS commonly used in firefighting foams in coastal watersheds in Massachusetts, and a large fraction of fluorine from unknown sources.

PFAS in AFFF, used for firefighting, contribute to contamination of drinking water supplies. Older AFFF containing long-chain PFAS, such as perfluorooctane sulfonate (PFOS) were phased out in the early 2000s. PFAS chemicals used in older and new AFFF share a similar carbon-fluorine backbone, but their characteristics, such as chain length, vary considerably. By characterizing this distinct composition, researchers can identify older AFFF from newer foams.

While AFFF is known to be a major source of contamination, PFAS from other sources are also present within watersheds, including septic systems, wastewater, agriculture, and atmospheric deposition, making it difficult to isolate their origins.

Optimizing a Method to Identify PFAS 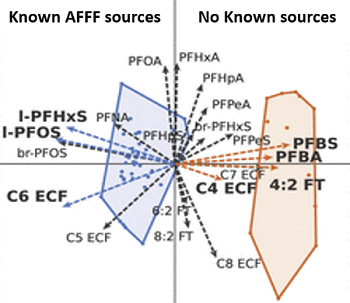 The research team designed an approach to distinguish the signature of PFAS from different sources, such as AFFF. First, they used mass spectrometry to analyze samples for 27 PFAS that are commonly detected in environmental samples.

Some polyfluoroalkyl compounds, called precursors, degrade into other fluorinated compounds, making it difficult to identify the original compound. To address this challenge, the team used a method called total oxidizable precursor (TOP) assay. The TOP assay uses an oxidant to transform PFAS into compounds that can be measured by traditional mass spectrometry. Then they developed a new method of statistical analysis to reconstruct the chain length of precursors and other fluorinated compounds to identify the predominant PFAS sources in environmental samples. 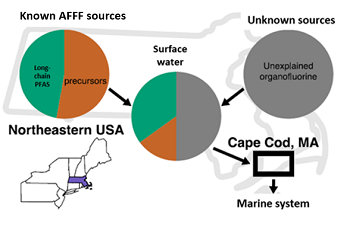 To identify PFAS and precursors that are not captured by TOP analysis, the researchers measured extractable organofluoride (EOF) in one of the sites with known AFFF contamination. EOF quantifies the total amount of organofluorine in samples without knowing their exact identity.

Analysis revealed high concentrations of unexplained EOF that did not originate from AFFF. In fact, targeted PFAS and precursors only accounted for 24 – 63% of EOF across samples, indicating that traditional approaches fail to explain substantial fractions of EOF in surface water downstream from AFFF sources, according to the authors.

According to the researchers, results from this study show that PFAS from older AFFF in the Cape Cod region are an ongoing and large source of contamination to the marine environment, even 20 years after discontinued use.

In future work, the team suggests further investigating the fate of AFFF precursors in marine food webs, as well as the source of unidentified PFAS that may contribute to exposures of aquatic life and seafood consumers.