Improving How Microbes Break Down PFAS

NIEHS Superfund Research Program (SRP) grantees demonstrated a method to break down per- and polyfluoroalkyl substances (PFAS) into smaller, non-toxic molecules. Led by Yujie Men, Ph.D., of the University of California, Riverside, the team also showed that some types of PFAS can be more easily degraded than others.

PFAS are a group of more than 9,000 manmade chemicals used in a variety of industrial and consumer products. Known as forever chemicals, PFAS persist in the environment because they are made up of strong carbon-fluorine chemical bonds, which are difficult to break. 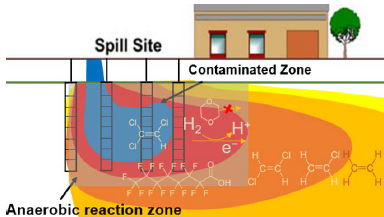 Men and team hope their system can break down PFAS in groundwater faster than current technologies.
(Image courtesy of Yujie Men)

Although some microbes can break down contaminants like PFAS in a process called bioremediation, the diversity of PFAS structures adds complexity to this type of chemical degradation.

The team explored how microorganisms, such as bacteria, can break the strong carbon-fluorine bonds that hold PFAS together —a process called defluorination. The goal is to transform them into non-toxic products in environments that are anaerobic, or without oxygen, such as groundwater. Their study included 16 different fluorinated carboxylic acids (FCAs), a relatively new group of PFAS.

They observed that unsaturated FCAs, which have at least one double bond between their carbon atoms with a fluorine atom attached to the double carbon bond, were more vulnerable to defluorination under anaerobic conditions. In contrast, saturated FCAs with similar structures were not degraded by the anaerobic microbial community. Saturated PFAS have no double bonds at all.

The FCAs Me-C6b, MeU-C6b, and MeU-C6a are structurally similar but the placements of the fluorine atoms and carbon-carbon double bonds affect their degradation potential. The polyfluorinated saturated compound Me-C6b was not defluorinated. MeU-C6a, which is unsaturated and perfluorinated, had a higher defluorination rate than the unsaturated polyfluorinated MeU-C6b.
(Image adapted from Yu et al., 2022)

They also observed that the location of the fluorine atoms is important. For example, MeU-C6b, which has no fluorine atoms linked to the carbons with double bonds, had low defluorination degree compared to the other unsaturated chemicals.

These results have implications for designing novel PFAS alternatives that can be easily degraded, the authors noted. 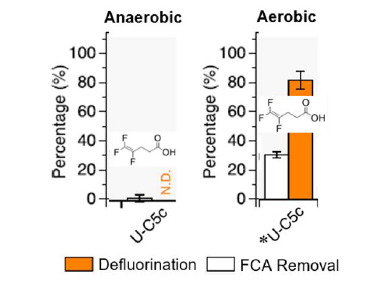 Compared to anaerobic bioremediation, the aerobic activated sludge experiment enhanced the defluorination and removal of the polyfluorinated FCAs, such as U-C5c.
(Image adapted from Yu et al., 2022)

The researchers also tested an aerobic remediation approach in which microorganisms in activated sludge, obtained from a local wastewater treatment plant, use oxygen to degrade FCAs.

According to the authors, future research should include both anaerobic and aerobic bioremediation strategies in attempts to degrade a broader range of PFAS.