By combining data across three different populations, NIEHS Superfund Research Program (SRP) researchers were able to better characterize sources of arsenic exposure that should be included in risk assessments. The study was a collaboration among the University of California (UC), Berkeley, University of New Mexico (UNM), and Columbia University SRP centers.

Arsenic, naturally found in earth's crust, is associated with a range of health problems including diabetes, cardiovascular disease, and cancer.

Health risk estimates are primarily based on exposure to arsenic in drinking water. Arsenic is mostly excreted from the body through urine. But the researchers found that comparisons of levels of arsenic that people ingest to levels of arsenic that they excrete were inconsistent. They believed that revealing other exposure sources in water, food, and dust might be important, especially for specific populations.

The team implemented a mass balance model, which follows the principle that the amount of arsenic entering the body should be similar to the amount that exits the body, to make excretion and intake more comparable.

Range of arsenic concentrations going into and out of the human body for three populations in the study.
(Image courtesy of Beene et al., 2022)

Arsenic in urine as a function of arsenic concentrations in drinking water in Bangladesh, Chile, and the Navajo Nation before accounting for additional exposure sources.
(Image adapted from Beene et al., 2022)

The collaborators then added data on arsenic from additional environmental samples:

The team observed that considering arsenic intake from the additional exposure routes specific to each population significantly improved the match between arsenic intake and excretion for the HEALS and NBCS populations.

According to the researchers, this is the first study to report the role of indoor dust in arsenic exposure for the Navajo Nation.

For the Chilean population, including diet in the analysis did not change the results. The authors explained that multiple factors may play a role in the variability observed in this cohort, including the time of the day when the urine sample was collected, temporal variability associated with diet, and individual meal preferences.

According to the team, characterizing these additional sources of arsenic exposure has important implications for better understanding associations between chemical exposure and disease in human studies. 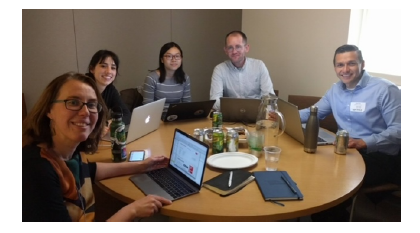 Funded by an SRP data management supplement, the three collaborators sought to make their individual projects' data accessible and reusable by sharing their data, metadata, and analytical code.

The team developed a data dictionary to describe common project-specific terminology, such as specific definitions, names, measurement units, and other attributes about data elements. This data dictionary allowed the team to harmonize their data and successfully use it for analysis.