A new Superfund Research Program (SRP) collaboration has developed a promising groundwater cleanup technology that provides an efficient, low-maintenance method of removing chlorobenzene and other compounds from water. The method integrates electrochemical oxidation, which uses electricity to transform contaminants into non-toxic substances, and membranes containing palladium (Pd), a metal used as a catalyst in many industrial chemical synthesis applications and groundwater treatment.

Chlorobenzene is a widely used solvent, degreasing agent, and intermediate in the manufacture of other chemicals. Its extensive use has led to significant contamination in soil and groundwater. Chlorobenzene bioaccumulates in the food chain and has been linked to cancer, genetic mutations, and damage to the nervous system.

The collaborative research team led by Akram Alshawabkeh, Ph.D., at the Northeastern University SRP Center, and Dibakar Bhattacharyya, Ph.D., at the University of Kentucky SRP Center, set out to evaluate the effectiveness of using different forms of Pd — powder or membrane — on the electrochemical degradation of chlorobenzene. A schematic of the electrochemical process using Pd to convert organic contaminants to non-toxic products.

Using an electrochemical flow-through water column system, the research team tested the effectiveness of both Pd on alumina powder and a nanoparticle form of Pd in a polyvinylidene fluoride (PVDF) membrane to conduct lab-scale groundwater treatment studies. The system applies low direct electric currents to manipulate the chemistry of the water using a chemical reaction known as an electro-Fenton reaction. As part of this process, Pd serves as a catalyst to speed up the reaction and then generates oxidants, such as hydrogen peroxide, that transform chlorinated contaminants into non-toxic substances.

They found that both powder and membrane-immobilized Pd forms were effective, degrading 96 percent and 88 percent of chlorobenzene, respectively. For both methods, the electro-Fenton reaction was achieved without the need to externally adjust the pH levels or add additional chemicals. 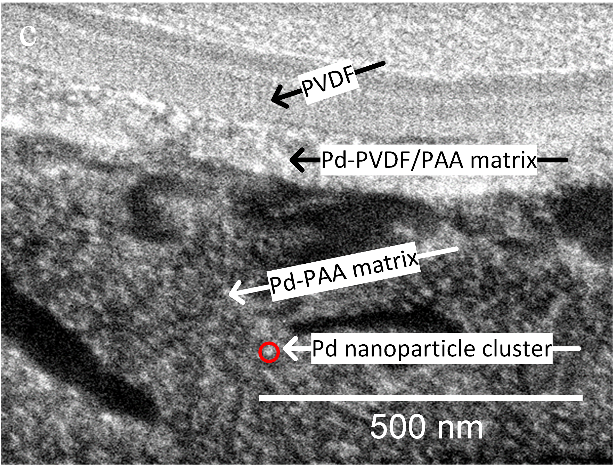 A cross-section image of the Pd-PVDF membrane used at the cathode.

Though slightly less effective, the membrane form was preferred because it is more efficient to synthesize and easier to maintain than the Pd powder, which requires separation steps after treatment.

According to the authors, the column has potential for use in real conditions, such as hazardous waste sites with a variety of contaminants. Because the electro-Fenton reaction can be achieved while water is flowing through the column, without the need for external pH adjustment or addition of other chemicals, it should be further tested for its potential as a sustainable cleanup system. The membrane’s efficiency and ease of use adds to the system’s promise.

This study was a result of a collaboration between the Northeastern University SRP Center and the University of Kentucky SRP Center after they found that their research overlapped at the 2016 SRP Annual Meeting.

Researchers at Northeastern had previously developed a technology that uses both Pd powder and the electro-Fenton process to remove contaminants from groundwater. The University of Kentucky SRP Center had developed membrane filters to remove chlorinated contaminants from groundwater, including a membrane containing Pd. As a result, the two centers combined their previous findings and collaborated on a study to assess the impact of the Pd form on the electrochemical degradation process. They chose chlorobenzene in part because it is a model molecule of dioxin-like chemicals, suggesting that this method may be useful for removing a wide variety of dioxins and other chlorinated compounds.