Traditional approaches to measure TBBPA in the environment are complex and expensive. Led by Bruce Hammock, Ph.D., the UC Davis SRP Center team developed a new detection technology as a simple and effective alternative.

The approach builds on decades of research in the Hammock lab developing immunoassays to detect hazardous chemicals in the environment. Immunoassays use proteins called antibodies to bind to a chemical of interest and indicate the presence and concentration of the chemical. Labels on the antibodies are used to detect this binding.

Hammock and his team have developed more than 40 immunoassays for hazardous chemicals. In general, these immunoassay technologies are more than 10 times cheaper than traditional detection methods and are easy to scale up for screening large numbers of samples.

Their latest advancement improves on traditional approaches using antibodies, which can only be produced in limited amounts, and are expensive and difficult to manipulate. The new sensor uses an innovative antibody technology pioneered by the team at UC Davis called a nanobody. Nanobodies are ideal for environmental analysis because they are small, easily produced, and can be manipulated in the lab to bind to specific chemicals, such as TBBPA. They can also be engineered in specific ways to improve their performance, such as combining with reporter proteins that amplify the signal when samples are diluted.

The SRP team previously developed an immunoassay for using nanobodies to detect TBBPA in urine and surface soil samples. TBBPA in sediment can range from .04 ng/g to 9800 ng/g, however, detecting small amounts of TBBPA in sediment is more complicated because of how the samples need to be processed and diluted, sometimes as much as 100-fold. Therefore, the research team set out to improve the sensitivity of the assay to successfully detect TBBPA in very dilute environmental samples.

The researchers first developed a one-step Bioluminescent Enzyme Immunoassay (BLEIA) using nanoluciferase, a small reporter protein that emits light when the nanobody binds to TBBPA. The combined nanobody-nanoluciferase recognizes the presence of TBBPA and amplifies the signal to detect TBBPA in diluted samples.

Compared to traditional immunoassay methods, the team demonstrated that the BLEIA approach was 10-times more sensitive, including detecting TBBPA at much lower concentrations. 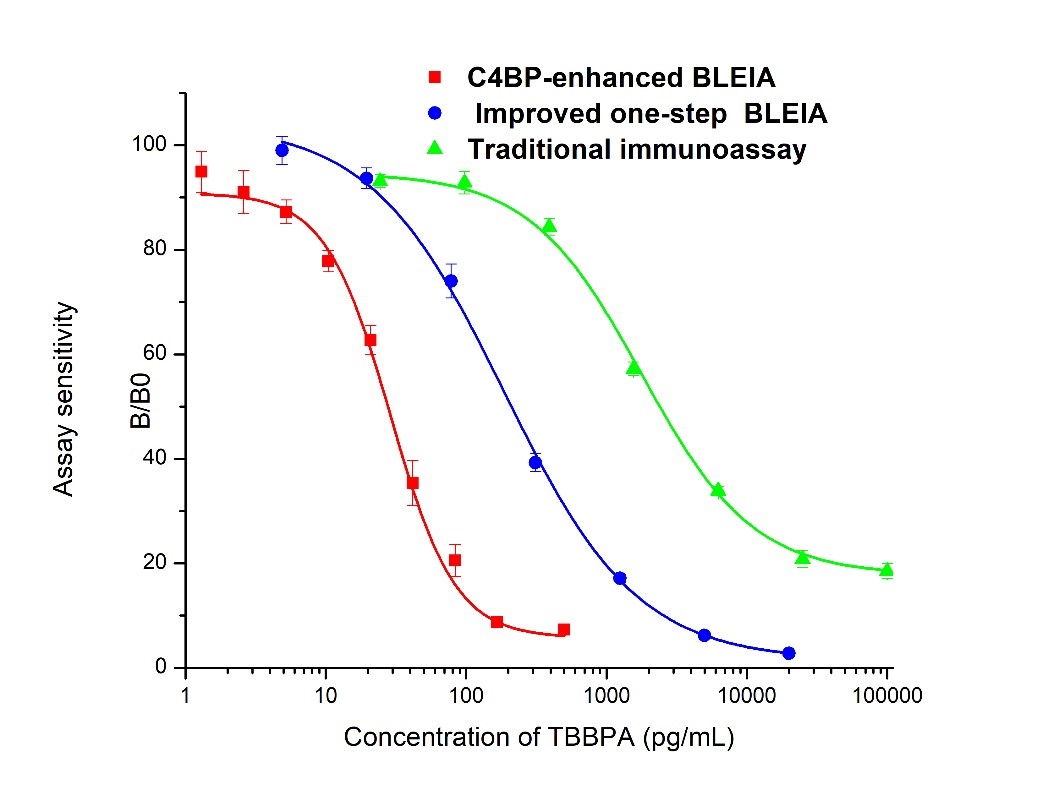 To further improve assay performance, particularly to detect trace amounts of TBBPA in diluted sediment samples, the researchers developed a new strategy to fuse the TBPAA nanobody and nanoluciferase using a specialized binding protein called C4-binding protein (C4BP). This new approach improved the binding sensitivity to TBBPA 7-fold and lowered the limit of detection 10-fold compared to their original BLEIA.

According to the authors, this new assay is a powerful tool to rapidly detect and monitor TBBPA in the environment even at low concentrations in challenging environmental samples, such as sediment.