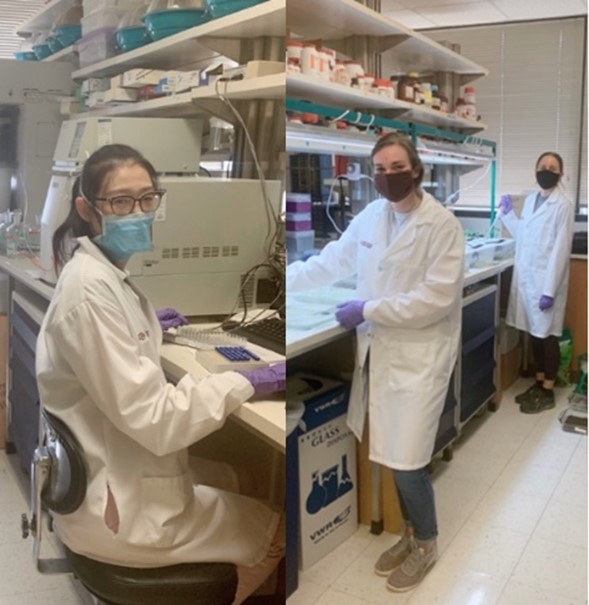 A new study from NIEHS-funded Superfund Research Program (SRP) Center researchers suggests that edible sorbents may be an effective treatment to reduce heavy metal exposure from consumption of contaminated water and food. According to the researchers, this is the first evidence that edible sorbents can bind heavy metal mixtures and protect against their toxicity in a living organism.

Sorbents are materials that bind and adsorb toxins onto their surfaces. The team has conducted a series of studies showing that when made from materials like clay, sorbents can be used as a therapy to bind toxins in the stomach and intestines, thereby decreasing exposures and reducing the likelihood of harm to health.

To test if metals would remain bound to the sorbents throughout the digestion process, the researchers added metal-loaded sorbents to a simulated intestine environment. They observed that only small amounts of bound metals dissociated from the sorbent complexes, suggesting that MAC and APM would remain stable and tightly bind mixtures of heavy metals in the intestine.

To test the safety and efficacy of the sorbents in a living organism, the group used a small freshwater organism called a hydra which has a very low tolerance for environmental toxins. MAC significantly protected hydra from the metals after a 92-hour exposure, reducing the toxicity of arsenic by 30%, cadmium by 33%, and mercury by 70%. APM reduced lead toxicity by 75%. 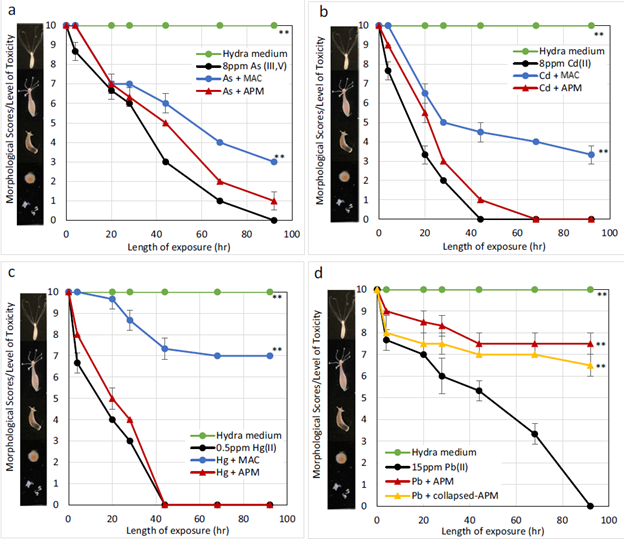 Hydra toxicity from arsenic (a), cadmium (b), mercury (c), and lead (d) and protection by sorbents. A score of 10 represents a normal healthy, hydra and a score of 0 represents a dead hydra. (Image from Wang et al., 2020, Environ Sci Pollut Res)

Additionally, to better simulate real-world conditions they tested the efficacy of these sorbents for a mixture or the four metals. They observed that APM alone showed negligible protection against the mixture (red line). MAC, and a combination of MAC and APM reduced toxicity of the mixture by about 77% in the hydra (blue and purple line respectively). 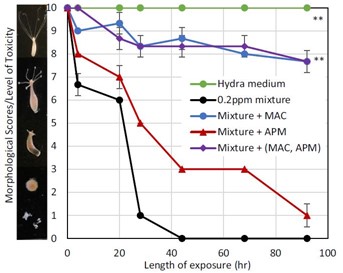 Hydra toxicity from a metal mixture and protection by sorbents. A score of 10 represents a normal healthy, hydra and a score of 0 represents a dead hydra. (Image from Wang et al., 2020, Environ Sci Pollut Res)

According to the authors, this is the first report that shows edible sorbents may provide a safe detoxification therapy for humans and animals exposed to heavy metal mixtures from contaminated food and drinking water.

While the authors note that further research is needed to confirm the safety and efficacy of these sorbents to decrease metal exposure in humans, their previous work (highlighted in a SRP Public Health Impact story) demonstrated that a montmorillonite clay sorbent was protective against aflatoxins in human populations. Aflatoxin is a fungal toxin often found in crop staples that is associated with impaired immune systems, malnutrition, and liver cancer.

After confirming that the sorbent was safe for human consumption, Phillips and colleagues tested its effectiveness in human clinical trials in Texas, Ghana, and Kenya and demonstrated that it decreased aflatoxin bioavailability and toxicity.

With these new studies, Phillips and his team have also developed a clay-based sorbent that can be added to food and water to reduce exposure to metals and pesticides following natural disasters, chemical spills, and other emergencies. Natural disasters result in the mobilization of harmful contaminants, such as heavy metals and pesticides, into drinking water and food sources. The group is interested in understanding and further developing the capabilities of sorbents to protect humans and animals against toxic substances during natural disasters.