Improved water quality and stream ecosystem recovery following treatment of mine waste depends on a mix of physical, chemical, and biological factors, according to a new study funded by the NIEHS Superfund Research Program (SRP) at the Colorado School of Mines. William Clements, Ph.D., professor at Colorado State University, and two doctoral students, led the study.

The North Fork of Clear Creek in Colorado is part of a 400-square-mile watershed designated as a U.S. Environmental Protection Agency Superfund Site in 1983 due to acid mine drainage (AMD). AMD results from the process of extracting natural resources from the ground. This can release mixtures of dissolved metals and fine sediments into nearby bodies of water and change the water’s pH.

In 2017, a water treatment plant was installed to improve water quality and ecological conditions for life in the creek. Using a combination of field observations in the stream and controlled experiments, the team gained a comprehensive understanding of how cleanup increased species abundance and improved stream habitats. 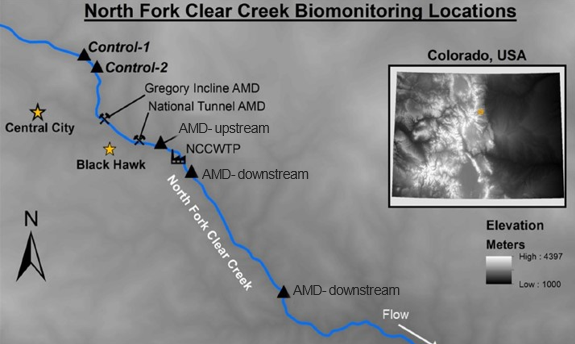 The team evaluated sites from 2011 to 2019, before and after the treatment plant was installed, and compared sites upstream and downstream of AMD sources, which represented control and AMD-affected sites. They monitored changes in total chlorophyll, algae composition, and macroinvertebrate community species composition and abundance, like mayflies, stoneflies, caddisflies, and midges.

As the team observed sites before and after the water treatment plant was installed in 2017, they were also able to evaluate if improved water quality increased the amount of nutrients and if organic matter in streambed communities contributed to wetland habitats along the creek's shoreline. This is a critical ecological relationship that is rarely considered when evaluating stream recovery.

To explore differences in metal sensitivity among organisms living in the stream, they used a combination of field and lab experiments.

In the field, mesocosms were created by placing 24 plastic trays filled with small rocks at each experimental stream site, allowing streambed communities to colonize them. The researchers assessed the influence of habitat degradation and water quality on stream communities upstream and downstream of the treatment plant compared to those at the control sites. For the lab experiments, the researchers brought some communities of organisms from the control site back to the lab and exposed the mesocosm communities to specific concentrations of dissolved metals. 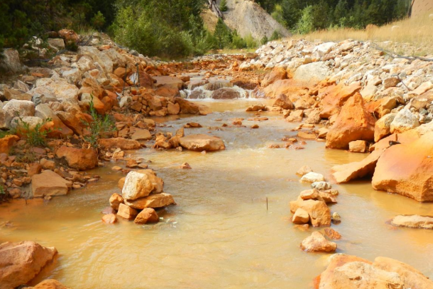 AMD contamination of the North Fork of Clear Creek turned rocks and pebbles orange, in addition to adding metals and sediments. (Photo courtesy of the Colorado School of Mines)

In a similar set of experiments, the team sought to understand how metals affected algae colonization and growth on stream substrate, normally rocks and pebbles in the field. The team deployed white tiles in the field downstream of the AMD sources for one year before the treatment plant became operational. After becoming coated with particulate metals, the team brought the tiles back to the lab and allowed algae to colonize them using the mesocosm experiments. To compare the effect of substrate color on algae, they also used white, cinnamon- and pumpkin-colored tiles, reflective of the orange-tinted substrate in AMD-affected streams, with unpolluted water and measured algae colonization and growth.

The authors found significant biological improvements within two years of water treatment, including increases in algae biomass and metal-sensitive species like mayflies. Among the sites downstream of the treatment plant, streambed organism abundance was similar, but community composition was different than upstream sites without AMD contamination, which the researchers attribute to habitat degradation. According to the team, habitat quality is an important, but often overlooked, component of cleanup projects.

The lab and field experiments revealed conflicting information about organism sensitivity to metals. For example, some of the species with high abundance observed in the field were among the most sensitive in the mesocosm experiments. The authors attributed the dissimilarities to differences in life history and life stages among macroinvertebrates and a combination of impaired water quality and habitat degradation. They suggested that factors such as dietary exposure, exposure duration, ability to drift and recolonize in the field, and effects of metals on sensitive life stages play an important role. 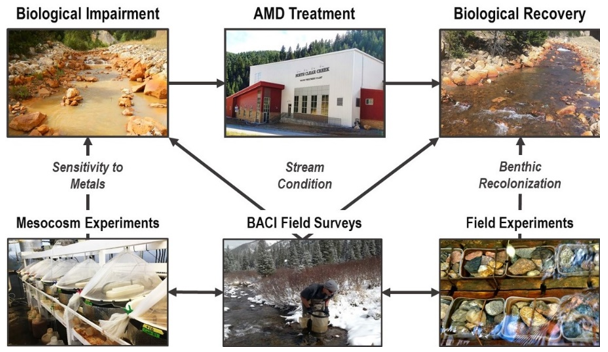 Metal-coated or colored substrate did not appear to affect algal biomass. Similar to their field biomonitoring studies, the researchers found algal colonization was normal on metal-coated surfaces once water quality improved.

According to the authors, their integrated approach of experimental and field biomonitoring studies may help predict potential remediation successes and better inform strategies for AMD cleanup in the future.