An NIEHS Superfund Research Program (SRP)-funded study in mice reported that exposure to a type of dioxin can alter cells in the liver, their metabolic characteristics, and how they are organized within the liver. According to the researchers, these changes in cell behavior and organization play a role in the development of dioxin-induced liver diseases, such as fibrosis and fatty liver disease.

Studies show that exposure to 2,3,7,8-tetrachlorodibenzo-p-dioxin (TCDD) — a contaminant created as a byproduct of burning organic materials — affects normal liver functions, especially those related to metabolism.

Led by Rance Nault, Ph.D., and Tim Zacharewski, Ph.D., of the Michigan State University (MSU) SRP Center, the team used novel approaches called single-cell and spatial transcriptomics to investigate how TCDD disrupts specific cells and their activities within lobule units. This technique quantifies the expression of genes within tens of thousands of individual cells, allowing researchers to understand what genes are expressed, in what quantities, and how they are spatially organized within the liver. 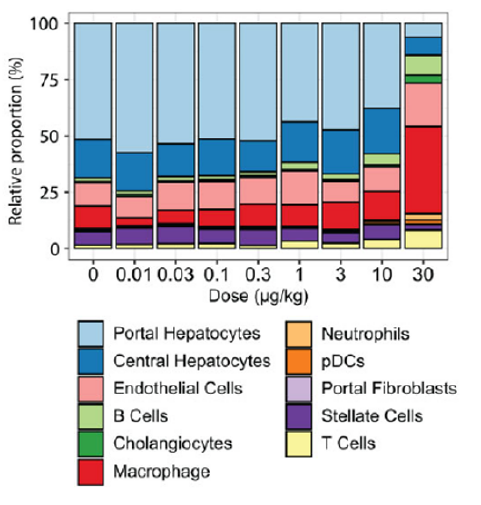 The adult liver consists of at least 11 different cell types. Of these, hepatocytes are the most abundant, and they play key roles in metabolism, detoxification, and protein synthesis. Macrophages, another cell type, protect the liver in response to injury.

For their analysis, MSU SRP researchers exposed mice to TCDD at doses ranging from 0.01 to 30 micrograms per kilogram every four days for 28 days. Then, they extracted and analyzed tens of thousands of cells in liver samples from untreated and TCDD treated mice.

The team observed that higher TCDD doses altered the proportions of liver cell types. For example, hepatocytes decreased from 69% in mice that were not exposed to TCDD to 14% in mice treated with the highest dose. Conversely, macrophages levels increased from 10% in untreated mice to 39% at the highest dose.

Depending on where cells are located within the liver lobule — the functional units of the liver, they express different sets of genes. This spatial organization is essential for healthy liver function.

Under normal conditions, liver cells are organized across the portal, mid, and central zones, specializing in different metabolic functions. For example, hepatocytes in the portal zone specialize in the production of glucose, while hepatocytes in the central zone are important for detoxifying chemicals, metabolizing fatty acids, and breaking down glucose to generate energy. 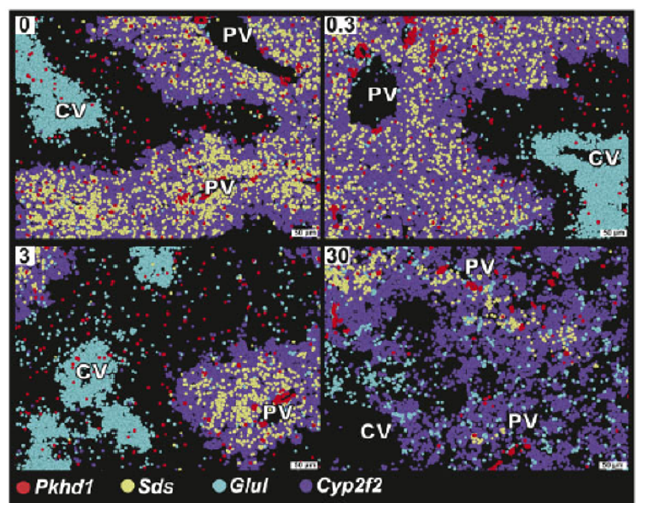 The spatial distribution of zonal marker genes around the central vein (CV) and portal vein (PV) changes as TCDD dose increases from 0 to 30 micrograms per kilogram.
(Image courtesy of Nault et al. 2022)

To understand how TCDD exposure altered gene expression within individual cells in each region, the scientists looked at markers — key genes — associated with zone-specific expression.

They observed that the expression of genes that usually were separated became more intermingled. For example, TCDD exposure reduced the expression of Glul, a gene responsible for metabolizing amino acids, typically found in the central region. At higher doses Glul expression occurred near marker genes that normally identify the portal region such as Cyp2f2. Similarly, at higher doses, Cyp2f2 had lower expression and was instead found to be expressed near markers representative of the central zone.

Overall, TCDD exposure disrupted the zonal organization of gene expression that existed between the portal and central regions within the liver lobule.

With higher doses of TCDD, the portal region lost its characteristic functions and adopted functions of the central zone. The authors explained that functional changes in portal cells can affect the metabolism of nutrients leading to adverse liver effects, such as fat accumulation and inflammation, resulting in metabolic diseases including non-alcoholic fatty liver disease (NAFLD) and diabetes, as well as liver cancer.

The team also aimed to understand how zone-specific changes affected pathways that play a role in protecting against liver disease. They found that TCDD initially dysregulates central expression Cyp1a1 and Cyp1a2, which are targets for the aryl hydrocarbon receptor (AHR), a cellular protein that regulates gene expression and signaling pathways related to metabolism, immune responses, the cell cycle, and other cellular functions.

According to the authors, this study illustrates some of the interactions between cells that underlie the progression of fatty liver to more severe liver disorders. Future studies should look at cell-specific and zone-specific interactions that disrupt metabolic pathways associated with liver toxicity.

The data used in this study is available for download at: