Chemical oxidation is a process commonly used to treat water contaminated with aromatic compounds like benzene. But, unexpected and potentially harmful breakdown products may result from this treatment process, according to a recent study from the NIEHS-funded University of California, Berkeley Superfund Research Program Center.

Aromatic compounds, such as benzene, toluene, ethylbenzene, and xylenes (BTEX) are frequently detected together in groundwater, where they can make their way into drinking water. In situ chemical oxidation (ISCO) is a common approach used to remove these contaminants from groundwater. This approach uses an oxidizing agent, such as hydrogen peroxide or persulfate, to trigger a chemical reaction that breaks down the contaminants.

While researchers have studied the mechanism by which chemical oxidation breaks down aromatic compounds, only a fraction of the transformation products have been accounted for in previous research. Led by David Sedlak, Ph.D., the team set out to characterize and assess the importance of different chemical pathways responsible for breakdown of these and related contaminants. 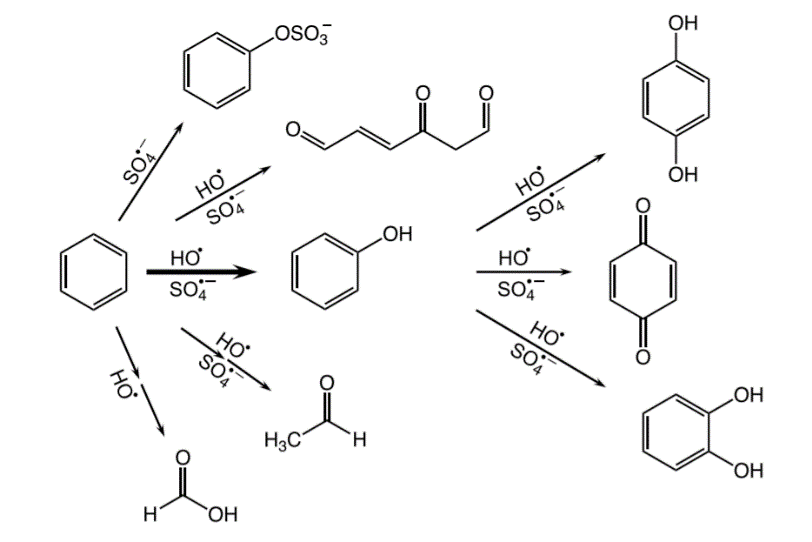 A simplified representation of the many chemical reactions and byproducts detected from the oxidation of benzene by hydrogen peroxide (HO) or persulfate (SO4). (Image from Van Buren et al., 2020, Environ Sci Technol)

The researchers explored the initial phase of the oxidation process using hydrogen peroxide or persulfate to generate the highly reactive radicals needed to break down the BTEX compounds. Using sensitive analytical methods, the researchers characterized the chemical steps involved and tracked new compounds produced during these reactions.

They found that oxidation of aromatic compounds involves numerous chemical reactions that produce a wide variety of breakdown products. Some of these chemicals can be easily removed with subsequent water treatment processes or be broken down by bacteria. Others may be difficult to treat and harmful to human health.

These findings, in agreement with their earlier studies, suggest that the formation of toxic compounds may be more common than previously thought.

The team observed a series of previously unknown breakdown products resulting from chemical oxidation. For example, a compound initially referred to by the researchers as TP126 was found as a result of persulfate reacting with benzene. Using advanced high-performance liquid chromatography and nuclear magnetic resonance spectroscopy, the researchers determined that TP126 is 4-oxo-2-hexenedial, a compound with some unusual properties.

This compound is structurally similar to other compounds that are known to modify DNA and proteins or lead to oxidative stress, raising additional concerns for human health.

The researchers illustrated the process by which 4-oxo-2-hexenedial, a toxic breakdown product of benzene, is formed during chemical oxidation. (Image from Van Buren et al., 2020, Environ Sci Technol)

The many mechanistic pathways and the diverse and sometimes unknown breakdown products point to the need for further study. According to the authors, similar chemical mechanisms of oxidation may be involved in creating toxic byproducts of other contaminants, like polycyclic aromatic hydrocarbons, during cleanup or when oxidants are used in drinking water treatment. Their findings highlight the potential drawbacks of using ISCO at hazardous waste sites without a better understanding of the breakdown products and the need to better characterize potentially toxic byproducts.