Common water treatment methods that remove phenols and other hazardous compounds may produce low levels of toxic byproducts, according to a new study by the University of California (UC), Berkeley Superfund Research Program (SRP) Center.

Phenols are often present in contaminated groundwater and agricultural runoff and can contaminate drinking water supplies. They can be removed with an increasingly popular water treatment process that converts hydrogen peroxide into hydroxyl radicals using ultraviolet (UV) light. In this process, hydroxyl radicals oxidize the phenols, transforming them into other compounds. Although these transformation products are generally nontoxic and can often be more easily removed using subsequent water treatment processes, toxic transformation products are a possibility.

In the new study, led by UC Berkeley SRP Center researcher David Sedlak, Ph.D., researchers assessed the toxicity of these transformation products and demonstrated that phenols can react with hydroxyl radicals to form toxic compounds known as enedials and oxoenals.

In collaboration with UC Berkeley SRP researcher Daniel Nomura, Ph.D., the researchers used a novel technique known as activity-based protein profiling to analyze the potential toxicity of the products formed in the oxidative treatment process. The technique assesses the formation of protein adducts, which indicates that a compound may disrupt protein structure or function in the body, leading to toxic effects. 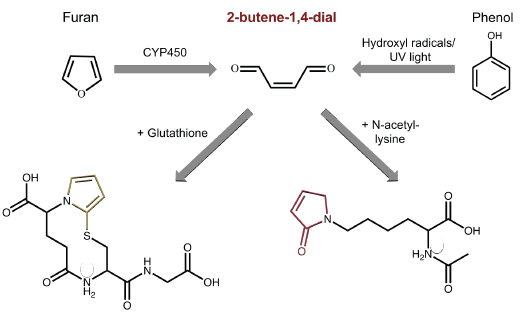 This figure shows the chemical reaction of the toxic dialdehyde 2-butene-1,4-dial with the amino acid lysine and the tripeptide glutathione. While previous research had observed the formation of 2-butene-1,4-dial when furan is metabolized by cytochrome p450 enzymes in the human body, the new study shows that the same compound is also formed when phenol reacts with hydroxyl radicals or UV light. (Photo courtesy of Carsten Prasse)

Unexpectedly, the research team observed that a chemical reaction between phenol and either hydroxyl radicals or UV light produced the toxic α,β-unsaturated dialdehyde 2-butene-1,4-dial. The same product is also formed in our body when the enzyme cytochrome p450 encounters furan, which is present in cigarette smoke and combustion exhaust. They show that this dialdehyde damages proteins by reacting with the amino acids lysine and cysteine.

By simulating the treatment of common phenol-containing compounds by the UV/hydrogen peroxide water treatment process, they demonstrated that the oxidation of methylated phenols during this process resulted in the formation of similar enedials and oxoenals. Although this chemical reaction has been previously observed in the gas phase, the authors note that these results provide the first experimental evidence that this reaction also occurs in water.

By 2020, two-thirds of the world’s population will be living in cities that are increasingly reliant on drinking water sources affected by agricultural runoff and municipal wastewater discharges. According to the authors, their new results highlight the potential risks of using oxidative treatment on contaminated drinking water sources and the need to further investigate potentially toxic byproducts. They also showed that the identification of adducts that are formed by reaction of organic contaminants with amino acids can be used as a sensitive method to identify reactive products formed during oxidative water treatment.

The study also points to the need to understand and address the fate of these toxic byproducts throughout the water treatment process. The authors discuss subsequent stages of water treatment and describe how additional steps in the process may remove the byproducts before drinking water reaches the consumer. For example, the drinking water distribution system or treatment processes that expose water to microbes, such as sand filtration or biological activated carbon, may be important sinks for enedials and oxoenals and should be explored further. Pretreatment methods also may help reduce the toxic byproducts formed during oxidative water treatment.

The presence of phenols and hydroxyl radicals in the environment and in living organisms means that these observations have potential implications beyond oxidative water treatment.

Reactions between phenolic compounds and hydroxyl radicals have been linked to formation of humic-like substances that play a role in surface water ecosystems and the atmosphere. Hydroxyl radicals are also present within living cells. When an overload of hydroxyl radicals cannot gradually be destroyed, their accumulation in the body can lead to oxidative stress, which then may lead to various adverse health outcomes, including cardiovascular diseases. According to the authors, their findings also may be particularly relevant to efforts to understand cellular damage caused by production of hydroxyl radicals in the body.