Background: The goal of ecotoxicology is to measure and predict the impact of pollutants on populations, communities, and ecosystems. New analytical tools, such as polymerase chain reaction (PCR) and microarrays, allow for gene expression analysis studies that identify biochemical pathways altered by exposure to environmental pollutants. This information can reveal modes of action of toxic chemicals and shed light on impacts of exposures to mixtures of pollutants. However, for such "omics" technologies to gain acceptance in ecotoxicology and application in risk assessment, scientists will need to define how biomarkers identified at the molecular level can be used to predict adverse effects in individuals, populations, and various species.

Although gene expression analyses have been used extensively in mammalian toxicology, applications have been limited in aquatic systems, primarily because the genome sequencing for relevant species is still in its early stage. With funding from the Superfund Basic Research Program (SBRP), Drs. Nancy Denslow and David Barber at the University of Florida are designing microarrays ("gene chips") for studies to examine the impacts of organochlorine pesticide (OCP) contamination on fish. 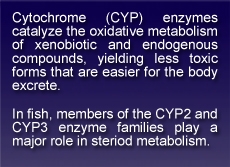 Advances: Drs. Denslow and Barber study poorly-reproducing, non-flourishing populations of largemouth bass (Micropterus salmoides-- LMB) in Central Florida lakes. These ecosystems are contaminated with high levels of OCPs, including p,p'-DDE (a DDT residual) and dieldrin . In initial studies, Drs. Denslow and Barber showed that plasma steroid levels were abnormal in fish from contaminated sites, which demonstrated that they could reproduce the altered profiles in fish fed diets containing p,p'-DDE or dieldrin (Garcia-Reyero et al., 2007). Dietary exposure to these compounds affected gene expression related to steroid homeostasis (steroid biosynthesis and metabolism), and hormone receptor signaling in both the liver and gonad of treated animals. These results suggest that OCPs have complex effects on the endocrine system, likely involving direct effects on steroid receptors as well as altered signaling by endogenous hormones.

Among the genes tested were steroid hormone receptors, genes involved in steroidogenesis (StAR and aromatase), and genes involved in metabolism, including two isoforms of CYP3 (CYP3A68, CYP3A69) and CYP2 (CYP2N14, and CYP2P11). The team determined that expression of the CYP enzymes changes during the reproductive cycle of LMB and differs between sexes (Barber et al., 2007).

To delve further into the mechanisms underlying the effects of OCPs, a custom microarray for LMB was designed by sequencing a normalized cDNA library using the 454 Life Sciences GS-20 pyrosequencer (Garcia-Reyero et al., 2008). This novel approach netted a total of 31,391 unique sequences from which 16,350 annotated individual transcripts were selected for the design of the microarray. The microarray was validated by examining the transcriptomic response in livers and gonads of male LMBs exposed to 17ß-estradiol. Based on pathway analyses, changes in the liver appeared to be primarily due to ER signalling and metabolism, whereas changes in the gonad primarily involved steroidogenesis, apoptosis, and metabolism. The quantum leap in speed and cost of high-quality sequence data generated by the pyrosequencing process depict a huge improvement in the effort of developing high-quality microarrays for ecologically relevant species. 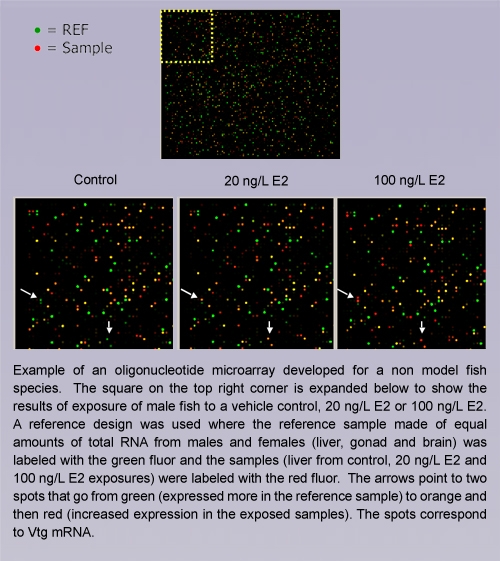 The array is used to examine transcriptional changes evoked by exposure to OCPs in both laboratory- and field-exposed fish. In one study, the team investigated the effects of dieldrin on the neuroendocrine system, primarily targeting the hypothalamus in the LMB brain. Dieldrin is a GABAergic antagonist, blocking GABAergic neurotransmission, which is an important regulator of neuroendocrine signaling. Over 100 genes in the hypothalamus of LMB were significantly altered by exposure to dieldrin, including genes that 1) have previously been implicated in Parkinson's disease, 2) are indicative of brain damage and apoptosis, and 3) are involved in hormone and cell signaling.

Significance: These results demonstrate that long term exposure of LMB to OCPs, during their reproductive phase, produces complex compound- and gender-specific effects that involve all parts of the fish endocrine system from the hypothalamus to the gonad and liver. This work also demonstrates the potential to rapidly create the tools necessary to assess large scale transcriptional responses in non-model species, paving the way for expanded impact of toxicogenomics in ecotoxicology. Future studies by the group will utilize compounds with known mechanisms of action to characterize the mechanisms of individual OCPs, as well as mixtures.