According to a new analysis of thousands of U.S. women of child bearing age, most exceeded the median blood level for two or more environmental pollutants - lead, mercury, and polychlorinated biphenyls (PCBs) - that are known to harm brain development of fetuses and infants. In the study, led by Brown University Superfund Research Program (SRP) grantee Marcella Remer Thompson, Ph.D., nearly 23 percent of the American women were at or above the median blood levels for three harmful chemicals. When the blood samples were examined for each chemical separately, one or more of the three chemicals met or exceeded the median blood level for 82.7 percent of women 16 to 49 years old.

"The three pollutants are of greatest interest because they are pervasive and persistent in the environment and can harm fetal and infant brain development, albeit in different ways," said Thompson. 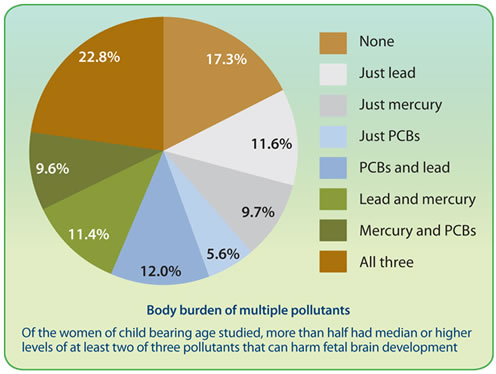 Each chemical can be passed to a fetus through the placenta and to an infant or child through breast milk. Despite what is known about the chemicals separately, scientists do not yet know whether co-exposure to all three chemicals is more harmful than each chemical alone.

The researchers used data from the U.S. Centers for Disease Control and Prevention National Health and Nutrition Examination Survey (NHANES) collected between 1999 and 2004 from 3,173 women 16 to 49 years old. Besides measuring blood levels of lead, mercury, and PCBs, Brown scientists also used survey data from the study to identify specific risk factors associated with higher blood levels of the chemicals, such as age and fish consumption.

Among several statistically significant risk factors, age was the most noteworthy. The risk of exceeding the median blood level for two or more pollutants increased exponentially with age. Women 40 to 49 years old had a 30 times greater risk of exceeding the median blood level than women 16 to 19 years old. This may be the case not only because chemicals accumulate in the body over time but also because many of these women were born before the 1970s when most environmental protection laws were enacted to reduce these chemicals in the environment.

Breastfeeding significantly reduced blood levels of pollutants in the mothers. Women who had breastfed at least one child for at least a month at some point in their lives had about half the risk of exceeding the median blood level for two or more pollutants. According to Thompson, it is likely that women pass the pollutants that have accumulated in their bodies to their nursing infants.

Although the study did not measure health outcomes for women and their children along with their exposures, the data suggests the need for further research on the health effects of co-exposures to chemicals.

"Our research documents the prevalence of women who are exposed to all three chemicals," said Thompson. "It points out clearly the need to look at health outcomes for multiple environmental co-exposures."