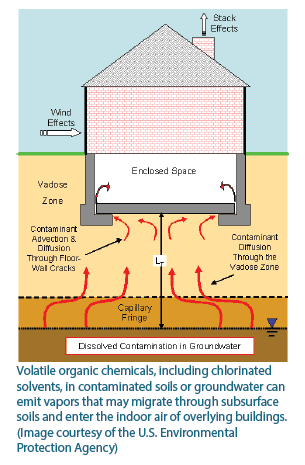 A recent Superfund Research Program (SRP) study reveals that measurements of chemical concentrations in groundwater may not be a good indicator of whether the chemicals are seeping into buildings and contaminating indoor air. The findings provide insight into how an approach incorporating multiple lines of evidence, including soil gas measurements and a 3-D model, can be used to better evaluate exposure risks from vapor intrusion into homes and buildings.

Vapor intrusion involves the movement of contaminants from beneath a home or a business up into the air inside the building. The vapor source is typically contaminated groundwater and often contains concentrations of chlorinated solvents, such as tetrachloroethylene (PCE) and trichloroethylene (TCE). Because of the complexities associated with characterizing vapor intrusion, the U.S. Environmental Protection Agency recommends that decisions about vapor intrusion risks be based on a multiple-lines-of-evidence approach that incorporates data from various sources, such as field data, modeling, and other pertinent site information. 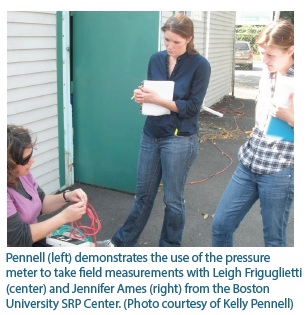 The field study included homes in a Metro Boston neighborhood adjacent to a former chemical handling facility, which operated between 1955 and 2002. During that time, the soil and groundwater became contaminated with chlorinated solvents, with PCE being the predominant chemical. As part of regulatory-driven sampling that had been previously conducted at the site, the indoor air concentrations measured in homes did not support the common vapor intrusion conceptual model used by practitioners. Researchers sought to better characterize the vapor intrusion pathways and investigate reasons for discrepancies between the conceptual vapor intrusion model and field observations.

The researchers collected these field data measurements using regulatory-relevant sampling approaches so that the results of their study had real-world relevance. Then, using a 3-D vapor intrusion modeling approach previously developed by the research team, they calculated the effect of various site-specific features on the vapor intrusion process. The 3-D model provides information about the soil gas concentrations throughout the subsurface, making it useful for interpreting the data that is collected during vapor intrusion investigations. The results of this study highlight the value of using physical models in combination with field data as part of the multiple-lines-of-evidence approach to improve decisions made at vapor intrusion sites. 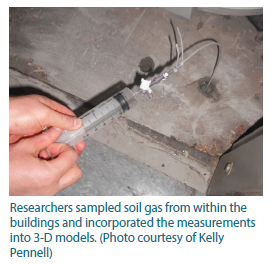 Vapor intrusion can occur in large communities where hundreds of homes are affected. This study shows that relying only on groundwater concentrations to assess vapor intrusion exposure is not appropriate. It also provides novel insights about comparisons between data collected using common field sampling techniques and well-established vapor intrusion models. It also shows how incorporating physical models with soil gas concentration data can inform classic conceptual models and improve risk management decisions. As a result, these findings are timely and relevant to researchers, practitioners, and regulatory agency staff addressing vapor intrusion.