Scientists have identified changes in biological pathways that are associated with prenatal arsenic exposure. This research, led by Rebecca Fry, Ph.D., at the University of North Carolina Superfund Research Program (UNC SRP), is the largest protein-based study of an arsenic pregnancy cohort to date. The NIEHS-funded work provides mechanistic insights into the links between early life exposure to arsenic and disease susceptibility and also identifies proteins and pathways that may later be used to identify markers of arsenic exposure and disease risk in humans.

Inorganic arsenic exposure is a worldwide health problem - more than 100 million people are exposed to arsenic levels that exceed the World Health Organizations recommended drinking water limit of 10 micrograms (µg) of arsenic per liter. Long-term exposure to arsenic can result in chronic health conditions such as cardiovascular disease, diabetes, and cancer. Exposure to high levels of arsenic during pregnancy is also associated with risks to maternal and fetal health, and childhood exposure can bring adverse health effects later in life, including increased rates of lung, bladder, and liver cancers.

"Health effects associated with exposure to environmental contaminants are not just determined by the exposure but also how the individual responds to that exposure," said Fry. "This study improves our understanding of the biological mechanisms underlying adverse health outcomes, particularly related to children’s health." 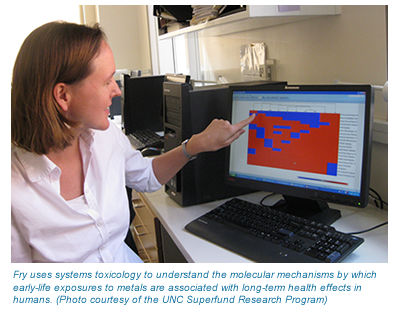 Fry recently established a pregnancy cohort, the Biomarkers of Exposure to Arsenic (BEAR) cohort, which consists of 200 mother-infant pairs residing in Gómez Palacio, which is in the Lagunera region of northern Mexico. Arsenic levels of more than 600 µg per liter have been detected in drinking water within the Lagunera region. Fry and her colleagues collected urine and drinking water samples from the mothers as well as umbilical cord blood from their infants. The researchers measured arsenic levels in the mothers’ urine and compared that with cord blood samples from the newborns. The researchers used this information to select 50 mother-infant pairs representing a range of arsenic levels in which to conduct the protein analysis.

Using a large-scale screen of protein levels, the researchers identified 111 altered proteins in the cord blood of the infants exposed to arsenic prenatally. Almost half of these proteins are regulated by tumor necrosis factor (TNF), which plays a critical role in inflammation and cellular growth and development-related signaling in the body.

"Using an analytical framework to target biological pathways associated with the altered proteins, we can pinpoint the master regulators of the response to arsenic exposure," said Fry. "The identification of these key players involved, such as TNF, informs the mechanisms of disease and helps us target novel molecules for arsenic health effects research."

Understanding differences in response to arsenic 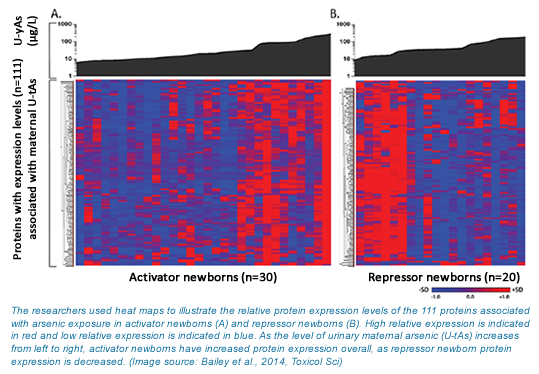 Fry and her research team also observed differences in proteins levels among people exposed to arsenic. Of the 50 newborns, 30 were considered activators, since they displayed a positive relationship between protein expression and maternal levels of urinary arsenic. Of the remaining 20, the repressors, displayed a negative relationship between protein level and maternal urinary arsenic concentration. The researchers then looked for relationships within the two distinct groups.

In activator newborn males, the research team identified a relationship between increased maternal arsenic levels and decreased head circumference at birth. This relationship was sex-dependent, as the difference was not seen in females, and dependent on protein expression, as it was only seen in activators.

According to the authors, the relationships between prenatal arsenic exposure and head circumference may be linked to health effects later in life because in general, there is a positive relationship between head circumference at birth and childhood cognitive ability. Of particular interest to this study, research based in Tórreon, Mexico, a city neighboring Gómez Palacio, demonstrated that boys and girls differed in terms of cognitive deficiencies associated with arsenic exposure, with more cognitive deficiencies observed in boys than girls.

The results provide an important foundation to continue efforts to link prenatal arsenic exposure, protein response, and disease susceptibility. The identified proteins may also serve as novel targets for understanding arsenic-associated effects on fetal growth and disease later in life.