Diverse groups of bacteria and fungi produce surfactants, generally to increase the bioavailability of carbon sources or to aid in attachment/detachment to surfaces. These biosurfactants are amphiphilic molecules with a polar, hydrophilic "head" group and a nonpolar, hydrophobic "tail" group. Biosurfactants represent potential tools for a wide variety of environmental, biotechnological, and industrial applications. Dr. Raina Maier at the University of Arizona SBRP heads a research program exploring potential uses for biosurfactants, a class of compounds that have several potential advantages over their synthetic relatives: 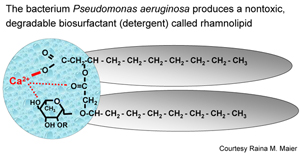 Dr. Maier's SBRP research focuses on the use of biosurfactants in remediation of metal and/or organic contaminated sludges and soils and on the discovery of new biosurfactants. Recent research has shown that rhamnolipid, a biosurfactant produced by a common soil bacterium Pseudomonas aeruginosa, can affect contaminant fate by two distinct mechanisms depending on the type of system:

In a study of two historically metal-contaminated soils (Coeur d'Alene, ID, and Camp Navajo, AZ), rhamnolipid was capable of removing the readily extractable (soluble and exchangeable) metal fractions. Although overall extraction efficiency of rhamnolipid is lower than removal by ex situ soil washing agents such as HCl, DTPA, and NTA, the caustic nature of the latter destroys the normal structure and properties found in a "healthy soil." These results suggest that biosurfactants such as rhamnolipid may have application for sites that must be remediated in an environmentally sensitive manner.

Researchers in Dr. Maier's laboratory recently discovered a new biosurfactant called flavolipid, which is produced by Flavobacterium sp. Flavolipid represents an entirely new class of biosurfactants. The polar head group of flavolipid features citric acid and two cadaverine (1,5-pentanediamine) molecules. This head group is very different from those found in any of the currently reported classes of biosurfactants (glycolipids, lipoproteins, phospholipids, fatty acid salts, and polymeric biosurfactants). Flavolipid has strong surface activity and emulsifying ability. It is an effective solubilizing agent, and in a biodegradation study it enhanced biodegradation of a model organic contaminant (hexadecane) by isolates of both Flavobacterium sp and Pseudomonas aeruginosa. Dr. Maier believes that this new class of biosurfactants will be of interest for potential use in a wide variety of industrial and biotechnology applications

Interestingly, Dr. Maier has been involved in development of a very different application for rhamnolipids - as a fungicide. Working with Dr. Michael Stanghellini, she determined that rhamnolipids can be used to combat fungus-like organisms that cause some of the most economically damaging plant diseases in the world. Zoosporic plant pathogens cause diseases that include root rots of citrus and pepper, downy mildew of pumpkin, cucumber, grape and pepper, and the late blight of potato, the disease associated with the 19th century Irish potato famine. Drs. Stanghellini and Maier found that the rhamnolipids control zoosporic plant diseases by disrupting the cell membrane of the zoospore, a fungal life stage which has no cell wall and is very mobile. 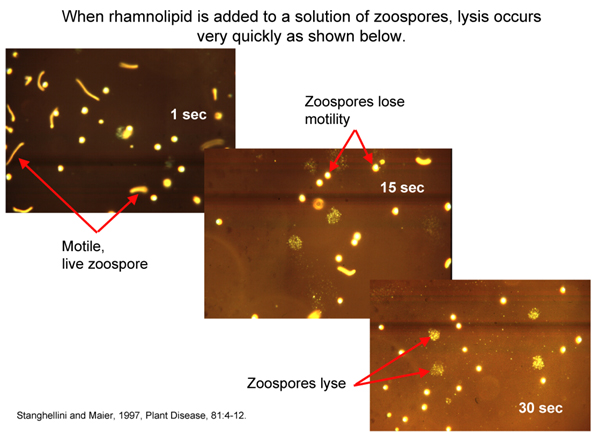