Background:  Oxidation-reduction (redox) reactions are among the most important factors controlling the persistence, mobility, and biological effects of many organic and inorganic contaminants.  Redox reactions play an important role in the geochemical processes that occur in groundwater; determine the mobility of biologically important materials such as nitrogen and sulfur; affect the speciation, and therefore the transport and biological effects of inorganic chemicals; and impact degradation rates and pathways of organic compounds.  As such, measurement of the redox status of groundwater and soil pore water of contaminated sediments/soils is critical to the design, implementation and monitoring of remediation processes at hazardous waste sites.

Oxidation-reduction potential (ORP) is an intensity parameter of overall redox reaction potential in the system – similar in concept to pH.  Macroelectrodes are commonly used for direct detection of ORP in streams, lakes, or wastewater treatment reactors, and provide efficient, accurate measurement with low maintenance costs.  However, the size of most macroelectrodes (1-3 cm in diameter) and the volume of sample needed to wet the electrode contacts make macroelectrodes inappropriate for measurements in small volumes of liquids or in soils. Also, their size makes it impossible to make spatial measurements over small distances, as needed for biofilm monitoring.  With an SBIR grant from the Superfund Basic Research Program, scientists at EnteraTech, Inc. are working to construct self-contained microelectrodes that can be used in situ in the laboratory or in the field to monitor a variety of constituents in contaminated soils and sediments. 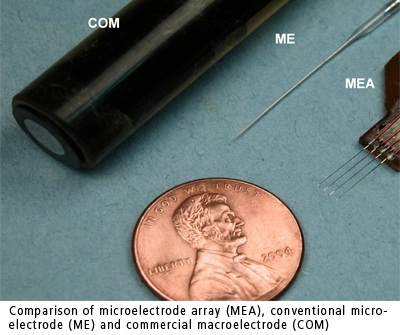 Advances: Early in the process to develop a method to fabricate gold microelectrodes, the EnteraTech scientists determined that borosilicate glass could be used in place of silicon, yielding electrodes that have slightly better compressive strength at significant costs savings.  The EnteraTech team fabricate integrated ORP microelectrode arrays from 175 µm thick borosilicate glass wafers in a four-step process: dicing, etching, metallization, and packaging.  The resulting arrays have 6-12 probes that are 1-2 cm long with spacings ranging from 450-1350 µm and precisely controlled sub-micrometer tip dimensions.  EnteraTech has fabricated microelectrode arrays with both potentiometric (monitors voltage between a sensing electrode and a reference electrode) and amperometric (measures current at a certain imposed voltage of the sensing electrode with respect to the reference electrode) modes.

The EnteraTech probes can be used with extremely small quantities of fluid – less than a picoliter – and can penetrate cells, biofilms and membranes.  The probes can be packaged with multiple sensors on each array. 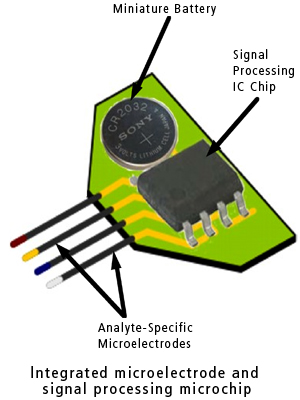 Testing of the probes in comparison to a conventional microelectrode and a commercial millielectrode demonstrated:

The scientists have also conducted tests to evaluate the individual microelectrodes within 4-probe glass and 3-probe silicon microelectrode arrays.  They found little difference between individual electrodes or combinations of electrodes and concluded that ORP measurements can be made using either single or multiple microelectrodes with an array.  This yields advantages including increased sensor reliability through redundancy; ability to measure local gradients between probes; and potential for longer probe life if only some probes are used initially and other probes are activated later as needed. In recent months, EnteraTech has made significant progress on techniques and methods needed to fabricate recessed probes.  The recess, up to 10 µm in depth, can be used to contain ionophores used in ion selective microelectrodes, such as those used more measurement of nutrients and heavy metals.  The recess is also needed for oxygen microelectrodes, which are currently under development.  This represents a major breakthrough in the development of dissolved oxygen and ion selective electrode designs.

Significance:  The development of a fast, accurate, and robust in situ monitoring technique, such as EnteraTech’s microelectrodes, will allow microscale in situ measurements of ORP at specific locations where biodegradation of toxic organics is occurring in soil, biofilm, sediments.  The microelectrodes could be used for initial assessment of field sites or laboratory samples and for continuous monitoring of the progress of remediation of a contaminant in the field.  Such devices will be useful to environmental engineers, soil scientists, microbiologists, limnologists, public health workers, oceanographers, and operators of drinking water, wastewater, and paper and pulp facilities. 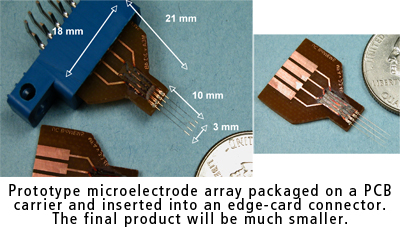