Background:  Chlorinated solvents such as trichloroethylene (TCE) and perchloroethylene (PCE) are among the most common contaminants at U.S. Superfund sites – and remediation of these compounds continues to pose significant technical and economic challenges.  Researchers at the University of Arizona SBRP, led by Drs. Bob Arnold, Eric Betterton and Eduardo Sáez, are exploring catalytic thermochemical and electrochemical treatment methods for halogenated organic compounds.  The research group is working to develop methods to destroy halogenated organic contaminants without accumulation of toxic intermediates (such as vinyl chloride) or toxic byproducts (such as dioxins or furans). 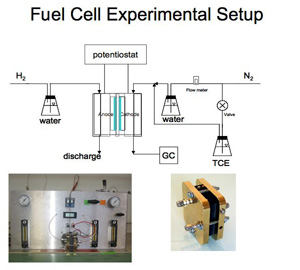 One approach that the University of Arizona (UA) team is investigating is the application of fuel cell technology for the reductive dehalogenation of gas-phase halogenated organics.  In fuel cells, H2 is oxidized to H+ at the anode and O2 is reduced to water at the cathode.  The internal circuit is completed via transfer of protons from the anodic to cathodic compartment across a membrane.  The overall reaction is exothermic, representing a source of useful electrical energy.  The UA team injected gas-phase chlorinated solvents in place of oxygen in the cathode side of a modified fuel cell and demonstrated that reductive dehalogenation occurs at the cathode.  This group was the first to study electrochemical reductive dehalogenation of vapor phase chlorinated organic compounds using a modified fuel cell device.

Advances:  The UA team constructed a polymer electrolyte membrane (PEM) fuel cell made up of two gold-plated copper end plates, two graphite plates to collect current and distribute gas within the cathode and anode chambers, and a membrane electrode assembly (MEA).  The MEA consisted of a proton-conducting membrane onto which the catalyst and gas diffusion layers were mounted on opposite sides.  Serpentine flow channels were cut into the graphite plates.  Experiments to examine destruction of chlorinated methane and chlorinated ethene/ethane yielded primarily methane and ethane, respectively – and no measurable vinyl chloride.  The kinetics were incredibly fast, with half times on the order of seconds or fractions of seconds.

Additional investigations determined that efficiency in fuel cell reduction of gas-phase chlorinated compounds was a function of the metal catalyst, the reactor potential, cathode temperature, the target compound identity and gas-phase concentration, the partial pressure of O2(g) in the cathode chamber and the condition (time in service) of the cathode.

Results of the studies showed that modified fuel cells can be used to destroy TCE.  TCE conversion was approximately first order in TCE concentration, with a half-life on the order of fractions of a second.  The major product of TCE reduction was ethane, which accounted for 95% or more of the carbon in the original TCE.  A small amount of ethylene (<5%) was also produced.  TCE reduction was faster than PCE and the rate of PCE transformation increased substantially with temperature in the range 30 - 70°C.

Fuel cell performance deteriorated with time in service, perhaps due to the accumulation of HCl on the cathode surface.  Reactor deactivation did not cause a complete loss of conversion capacity and the researchers found the conversion efficiency was restored with a relatively quick wash with DI water, which was enough to bring TCE conversion back to its original level.  The recovery of reactive capacity suggests that a technology based on the UA system would need alternating wash and reaction cycles to be feasible.

Significance:  Fuel cell technology offers a practical means for treating vadose zone contaminants collected via soil-vapor extraction (SVE).  New vadose zone treatment technologies are particularly important in the southwestern United States where the water table is commonly hundreds of feet below the surface and contaminants are often trapped as liquids in the overlying unsaturated sediment.

The UA team believes that fuel cell technology may represent a quick, effective and convenient method for treating gas-phase chlorinated contaminants.  In addition, this technology may yield significant cost savings.  For example, they compared the cost of treatment of a 100-m3/hr gas-stream contaminated with 200 ppm chlorinated hydrocarbon via fuel cell technology to treatment via adsorption on activated carbon.  They assumed that the main operating cost of the modified fuel cell to be H2 consumption and determined that the operating cost of the modified fuel cell would be less than 5% of the cost of activated carbon – which would then require disposal as hazardous waste or treatment to remove/destroy the contaminants.