Background: Epidemiology studies of populations exposed to low doses of arsenic have documented increased risks of numerous and diverse human health effects including several different cancers, type 2 diabetes, vascular disease, cardiovascular disease, and reproductive and developmental problems. The mechanism(s) underlying these various health effects is unknown. Knowledge of how long-term exposure to low, environmentally relevant doses of arsenic initiates processes that lead to adverse health effects is critical to evaluating overall disease risk of people who are exposed to arsenic in drinking water.

Advances: Dr. Joshua Hamilton's group at the Dartmouth College SBRP first reported that arsenic is a potent endocrine disrupter, blocking the ability of the glucocorticoid hormone to signal through its hormone receptor, the glucocorticoid receptor (GR). 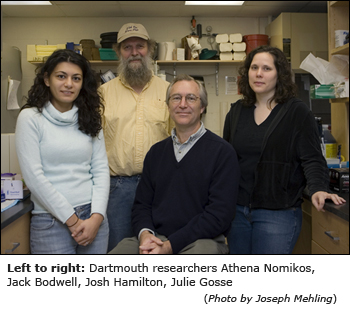 Dr. Hamilton, in collaboration with Dr. Jack Bodwell of the Dartmouth Medical School, conducted a follow-up study investigating arsenic's impacts on other hormone receptors. They focused on three other closely related members of the steroid receptor family - the progesterone receptor (PR), androgen receptor (AR) and mineralocorticoid receptor (MR). The hormones they interact with to elicit gene expression (i.e., progesterone, testosterone and the mineralocorticoid hormones, respectively) that regulates a wide range of biological processes and Dr. Hamilton believes that disruption of their normal function could explain, in large part, how arsenic can influence so many disease processes in so many diverse tissues.

Dr. Hamilton's group used a cell culture model to evaluate steroid receptor responses to arsenic exposure, working with EDR3 rat hepatoma cells that lack endogenous expression of these receptors but which exhibit normal hormone-inducible gene expression when each of these receptors is individually re-expressed in the cells by transfection of the appropriate genetic construct. The researchers exposed these engineered cells to low levels of arsenic and then assessed its effects on levels of receptor-induced gene expression. They found that like the GR, the other steroid receptors tested all showed a biphasic response: low arsenic levels (0.1-0.7 µM, 7.5-50 ppb) stimulated hormone-induced transcription, while slightly higher but still non-toxic levels (1-3 µM, 75-225 ppb) were inhibitory. In a separate study (manuscript in process), the researchers found similarly that the estrogen receptor (ER) displays the same basic pattern of response. Thus, all five of the steroid receptors responded to arsenic disruption the same way. This unusual dose-response suggests that arsenic might have very different biological effects at the lower and higher doses.

Dr. Hamilton's current data, in conjunction with previous studies by this group, clearly demonstrate that none of these mechanisms is responsible for steroid receptor-mediated response to low-dose arsenic. It is likely, based on these results to date, that the mechanism for arsenic's effects involves a shared pathway or regulatory machinery that directly affects hormone-receptor mediated gene transcription.

Significance: These results suggest that many other nuclear hormone receptors may be affected similarly by arsenic. The researchers are currently investigating whether arsenic also affects other members of the larger nuclear hormone receptor super-family, such as the receptors for thyroid hormone or retinoic acid, which are more distally related to the steroid receptors but share some common regulatory machinery. Given the myriad of functions that these receptors and their hormones modulate in normal human biology, as well as the many diseases in which they have been shown to play a fundamental role, Dr. Hamilton hypothesizes that this is one of the major pathways by which arsenic increases the risk of the growing list of diseases associated with arsenic exposure.

These results also suggest that there may be human health effects at drinking water levels of arsenic at or below the current U.S. drinking water standard of 10 ppb since these effects were observed at levels far below 10 ppb in cell culture and at or below this level in several in vivo models.