Background: Many technologies are applied for hazardous waste site remediation including soil vapor extraction, catalytic oxidation and other thermal methods. These methods are costly, time-consuming and can generate concerns within local communities. Carbon adsorbents are prevalent in gas and liquid cleanup operations at Superfund and other hazardous waste sites, particularly for dilute waste streams. Granular activated carbon (GAC) readily adsorbs volatile organic compounds (VOCs), nitrogen oxides (NOx), and sulfur oxides (SOx) from the gas phase. As adsorption progresses, the available adsorption sites diminish and the efficiency of the GAC decreases. To maintain high adsorption efficiencies, the saturated carbon adsorbents are generally removed and transported to landfills for disposal. Fresh carbon adsorbents must be purchased periodically to replace the spent adsorbents. The cost of this GAC changeout is generally prohibitive unless the waste stream is extremely dilute. Alternatively, the used GAC may be reactivated by liberating the adsorbed chemicals, restoring the available adsorption sites on the carbon, thereby concentrating the adsorbed chemicals into a waste stream that is more easily disposed. In some cases, the previously "wasted" chemicals can even be recycled.

Dr. Chang Yul Cha, of the CHA Corporation, discovered that microwaves provide an effective means of reactivating carbon adsorbents, and the process can be implemented on site. The CHA microwave-based GAC regeneration process is designed to desorb and capture a wide variety of both chlorinated and non-chlorinated VOCs. As a result, the GAC can be reused and potentially valuable chemicals can be recycled. Even if the recovered chemicals have little value, the volume of waste is significantly reduced, simplifying disposal. Because the cost of carbon change out can be reduced or eliminated, it is economically feasible to use GAC as an alternative to catalytic oxidation for concentrated waste streams.

Advances: With Phase I and Phase II Small Business Innovation Research (SBIR) funding from the SBRP, Dr. Cha conducted extensive design, laboratory and scale up experiments plus field tests at McClellan Air Force Base. Most recently, the CHA Corporation designed, constructed and tested a field-ready mobile microwave carbon reactivator. The mobile microwave reactivating unit constructed by the CHA Corporation utilizes two 25-kg/hr microwave generators to regenerate carbon at an overall rate of 50-kg/hr. Carbon hoppers are arranged in an airlock configuration, to allow for continuous processing of large amounts of activated carbon. The system is compact enough to mount on a trailer, making it simple to regenerate carbon at any site. 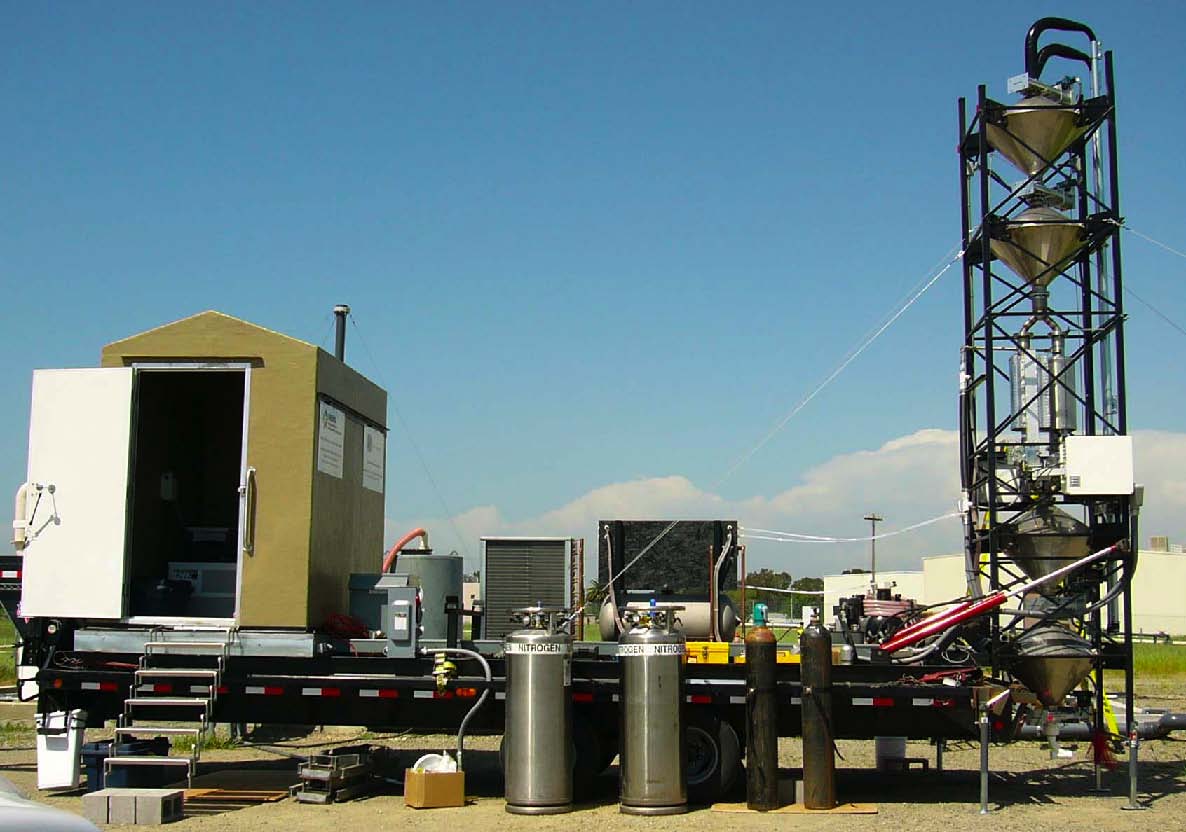 In May 2006, Dr. Cha transported the 50-kg/hr mobile unit to McClellan Air Force Base for a 2-week field demonstration. The Air Force is currently evaluating the commercial viability of the CHA microwave technology in conjunction with carbon adsorption as an alternative to the existing catalytic oxidation systems used at soil vapor extraction (SVE) sites containing chlorinated solvents. Field data were confirmed with laboratory testing of GAC saturated with toluene. Results demonstrated removal efficiencies of 96 - 99.5%, depending on the amount of microwave power applied.

In addition, Dr. Cha is investigating the applicability of the CHA microwave system to regenerate GAC saturated with tetrachloroethylene (PERC). Dr. Cha placed a small adsorber on site at a dry cleaning facility to collect PERC from the exhaust air stream. The stream had a very low PERC concentration (less than 5 parts per million by volume). The test began with 37.2 kg of fresh GAC adsorbent. After saturation with PERC, the weight was 49.5 kg. The carbon was then regenerated with the CHA microwave system, yielding 38.4 kg of regenerated GAC (about 95% efficiency). A total of 6 liters of solvent was recovered during regeneration of the GAC and returned to the dry cleaner. Preliminary characterization of the solvent recovered from the dry cleaner indicated a specific gravity of 1.57, very close to the specific gravity of 1.6 given on the Material Safety Data Sheet (MSDS). The solvent was added back into the solvent tank of a dry cleaning unit and used in the dry cleaning process. The recovered solvent performed qualitatively the same as the fresh solvent.

Total carbon reactivation cost is $0.60 per kg for the CHA Corporation's integrated 50 kg/hr system. The conventional GAC change-out cost including transportation and offsite disposal is approximately $4.73/kg. This difference in the operating costs could result in recovery of capital costs within one year.

There is a high potential for economic and environmental benefits from recycling of PERC used by the dry cleaning industry. Currently, large amounts of PERC are lost in the air exhausted from dry cleaning processes. Most of this PERC could be recovered with the installation of a GAC adsorber and by utilizing the CHA microwave technology to regenerate the GAC and recover the adsorbed PERC.

Overall, the benefits of this technology are: (1) the cost advantage compared to remediation systems which rely on GAC disposal; (2) vastly concentrated (reduced) waste streams, which can be more easily managed to prevent environmental contamination; (3) capture and potential recycling of valuable solvents; and (4) improved community acceptance compared to thermal technologies and others that produce higher volume waste streams and/or a greater potential for environmental contamination.

Dr. Cha is eager to apply the microwave technology at other sites around the country. Please see the CHA Corporation website for additional information.