An inexpensive and rapid screening assay capable of detecting and estimating the relative biological/toxic potency of complex mixtures of dioxin-like HAHs in numerous matrices would greatly facilitate exposure and epidemiological analysis and screening for HAHs. With support from the Superfund Basic Research Program, Dr. Michael S. Denison at the University of California, Davis and Dr. George C. Clark of Xenobiotic Detection Systems (XDS), have developed a rapid and inexpensive recombinant cell bioassay system for the detection and relative quantitation of dioxin-like chemicals in sample extracts that is amenable for large scale screening analysis.

In May 2007, the EPA's Office of Solid Waste (OSW) Organic Methods Workgroup formally reviewed and approved the draft Method 4435 for inclusion into Test Methods for Evaluating Solid Waste, Physical/Chemical Methods, also known as SW-846. The XDS-Chemically-Activated Luciferase gene expression cell bioassay system (XDS-CALUX®) for dioxin-like chemicals, will soon be published and will be posted under "new methods" on the SW-846 website.

Advances: Drs. Denison and Clark and their laboratories designed the XDS-CALUX® bioassay on knowledge of the molecular mechanism of toxicity of dioxin-like HAHs. 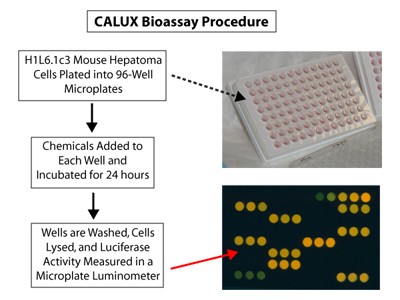 They used recombinant technology to place the firefly luciferase gene under the control of the Ah Receptor (AhR) and inserted it into a mouse cell line. The bioassay uses the cell line to detect the presence and level of dioxin-like HAHs in a sample as these compounds bind to the AhR, which then localizes in the nucleus of the cell and binds to dioxin responsive elements (DRE) inducing expression of firefly luciferase. The enzymatic activity of luciferase leads to the production of light that is easily measured. Dioxin-like HAHs present in extracts of environmental matrices are determined following sample processing methods. The assay responds in a time-, dose-, and AhR-dependent and chemical-specific manner. The XDS-CALUX® bioassay is sensitive to <1 part per trillion for dioxin/furan and polychlorinated biphenyls (PCB) analyses. The bioassay is applicable to: biological matrices including blood (whole serum and extracts), breast milk, and tissues extracts; environmental matrices including soil and sediment, ash, and pulp and paper; and food matrices including animal fats (oil and fats), milk and butter, and animal feeds.

Drs. Denison and Clark have been working to fine-tune the assay for nearly 10 years and have made it available to the research and regulatory communities. Accordingly, the use of the patented technology (US patents 5,854,010 and 6,720,431) has been spread throughout the world:

Significance: The XDS-CALUX® bioassay analyses costs are 40%-70% lower than GC/MS analyses. In the EPA SITE study, the XDS-CALUX® analysis took 1.5 months to analyze 209 samples vs. 8 months for the GC/MS analysis. These substantial savings make XDS-CALUX® an excellent screening tool and give researchers, laboratories, and government agencies the option to reduce the use of expensive GC/MS analyses in conjunction with the XDS-CALUX® results to estimate if dioxin levels are above client-established threshold levels.

The EPA OSW Organic Methods Workgroup, by accepting the method for publication in SW-846, approves the bioassay for use in conducting the evaluations and measurements needed to comply with the Resource Conservation and Recovery Act (RCRA). Because other countries look to the US EPA for approval or validation of methods before they are implemented, the inclusion of XDS-CALUX® in SW-846 is a very important step in getting the technology used throughout the US and world.