Background: The removal of lead from gasoline in 1973 and the resulting reduction in blood lead levels are generally perceived as public health success stories.

However, in many areas of the country, exposure to lead is still a concern due to lead-based paints found in old housing. Dust and soil contamination most frequently occurs when lead-based paints are peeled, worn, or sanded in or around housing. Children are most commonly exposed to lead through chronic ingestion of lead-contaminated dust. Lead poisoning is a serious environmental health issue in communities such as Manchester, New Hampshire, where the housing stock is old. In 2000 a Manchester, NH child died of lead poisoning. 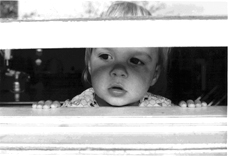 For the past five years, Nancy Serrell and her staff at the Dartmouth College SBRP Community Outreach Core have been working with the Manchester Health Department, The Way Home (a housing advocacy group), and the Greater Manchester Partners Against Lead Poisoning to improve measures to prevent lead poisoning in New Hampshire. Ms. Serrell and her team have initiated and supported diverse activities to facilitate awareness and collaboration among community groups, health departments, non-profit organizations, and family medical practices.

Advances: The work was initially funded through two EPA pilot grants and evolved as partnerships expanded into the Manchester-Dartmouth Partnership for Health (MDPH). With additional funding from SBRP, the MDPH worked with a coalition of stakeholders in a series of activities that led to promulgation of new legislation that promotes primary prevention of childhood lead poisoning:

Convening of a "Call to Action" community meeting. The MDPH produced a white paper, "A Call to Action: Eliminating Lead Poisoning in Manchester," and sponsored a community breakfast for foundations, the banking community and other stakeholders. The goal of the meeting was to propose several "action steps" and to foster new partnerships. Following this meeting, two New Hampshire foundations agreed to fund a broad-based Lead Poisoning Prevention Collaborative to coordinate state-wide efforts to tackle lead poisoning. Collaboration with not for profit and government organizations. In fall of 2006, the Dartmouth Outreach Core submitted a proposal to make lead poisoning prevention an "Action Step" priority for the New Hampshire Children's Advocacy Network (NH CAN), a coalition of nearly 200 state organizations committed to children's issues. NH CAN members voted to adopt the Action Step as a priority for the 2007 legislative session. As part of this process, Dartmouth's outreach team was trained by the FrameWorks Institute in effectively using linguistic framing to influence public discourse. In December 2006, Ms. Serrell was appointed to the Governor's Task Force on Lead Poisoning Prevention, which was asked to review the state's current laws and regulations and to recommend changes.

Development of a Quality Improvement Toolkit for medical professionals. Though the U. S. Centers for Disease Control recommends that medical practices in communities with a predominance of pre-1950s housing screen all one and two-year olds for lead poisoning, screening rates in Manchester fall short of this guideline. In partnership with five city medical practices, the MDPH is working to address this issue. The project began with an audit of medical charts to identify whether practices were screening children appropriately and lunchtime conversations with medical practitioners to identify barriers to screening. New partners (the NH Childhood Lead Poisoning Prevention Program and the University of New Hampshire) have joined the project, and the collaborators are designing and testing an online Lead Screening and Management Quality Improvement Toolkit that will include a streamlined chart audit tool, Grand Rounds tutorials and patient materials in several languages.

Participation in a Vermont initiative to research funding strategies for lead poisoning prevention. Ms. Serrell and Bethany Fleishman (Outreach and Translation Assistant) were invited by the Vermont Attorney General and Vermont Commissioner of Health to participate in a statewide "Get the Lead Out of Vermont" initiative. They participated in a subcommittee that researched and reported on funding strategies for lead poisoning prevention.

Significance: Inspired at the "Call to Action" community meeting co-sponsored by the Dartmouth Outreach Core and the Manchester Health Department, Senator Betsie DeVries (D) proposed legislation to help protect children from lead exposure. New Hampshire SB 176, which was passed by the NH Senate and House on June 17, 2007, incorporates the key recommendations of the Governor's Task Force on Lead Poisoning Prevention. The new bill: 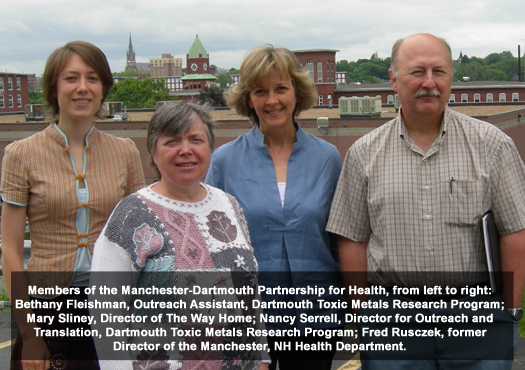