Methylation (the addition of methyl groups) of ingested inorganic arsenic to methylarsonic (MMA) and dimethylarsinic acids (DMA) occurs by enzymatic reactions that transfer the methyl group from S-adenosyl-methionine (SAM) to arsenic. Methylation of arsenic facilitates its urinary elimination and is considered a detoxification process. Because folate compounds play an important role in regulation of SAM levels, folate may also influence arsenic methylation and toxicity.

The Columbia University SBRP is a collaboration of highly interactive research projects focused on improving our understanding of health effects, geochemistry, hydrology and remediation of arsenic in groundwater. 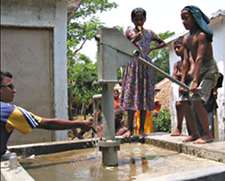 Their aim is to lower the health risks associated with exposure to arsenic in groundwater, by guiding the focus of interventions in high-risk areas. The Columbia SBRP has established the Health Effects of Arsenic Longitudinal Study, a cohort study with a population of nearly 12,000 individuals exposed to a wide range of inorganic arsenic (InAs) from drinking water in Araihazar, Bangladesh. The Columbia group has also made methodological advances increasing our capabilities to measure total arsenic and arsenic metabolites in blood, where concentrations are an order of magnitude lower than those in urine. They found that blood arsenic is a biomarker of arsenic exposure and is directly associated with the risk for arsenic-induced skin lesions.

Dr. Mary Gamble is building upon this work to investigate nutritional influences on arsenic metabolism and toxicity. Her research team documented a high prevalence of hyperhomocysteinemia (abnormally high levels of homocysteine in the blood; caused by deficiencies in folic acid, B6 or B12) and folate deficiency among Bangladeshi adults; these conditions were both associated a reduced capacity to methylate arsenic. 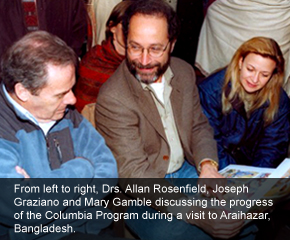 Her team tested this hypothesis by measuring total arsenic and arsenic metabolites in blood of 130 participants with low plasma folate before and after 12 weeks of supplementation with folic acid (400 µg/day, equivalent to the US Recommended Daily Allowance) or placebo. Folic acid supplementation lowered total blood arsenic concentrations by increasing the methylation of InAs and MMA to DMA, which is rapidly excreted in urine. This was evidenced by reductions in the concentrations of InAs and MMA in blood and a rapid increase in the concentration of DMA in urine. Specifically: 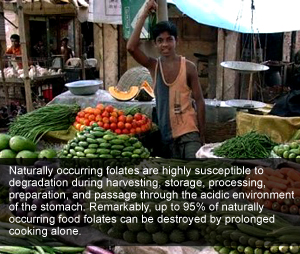 This study indicates that folic acid supplementation lowers total blood arsenic primarily by lowering concentrations of MMA in blood. These findings imply that folic acid supplementation may reduce body stores of arsenic. Dr. Gamble concludes that therapeutic strategies to facilitate arsenic methylation, particularly in populations with a high prevalence of folate deficiency and/or hyperhomocysteinemia such as Bangladesh, may lower blood arsenic concentrations, and thereby contribute to the prevention of arsenic-induced illnesses. This research, which provides information critical to the identification of potential targeted interventions for preventing arsenic toxicity, could have significant impacts on public health and policy.