Background: Asbestos fibers, one of the most significant environmental hazards in the world, are established carcinogens for humans and animals. Both experimental and epidemiologic data have shown that asbestos exposure is closely associated with the development of pulmonary fibrosis, bronchogenic carcinoma, and malignant mesotheliomas of the pleura and peritoneum. Although occupational exposure is considered the main route of exposure, there is evidence that asbestos-associated diseases are linked to family members of asbestos workers and in residents living near industrial sources of asbestos. The finding in 2000 that nearly one third of the 4,500 residents of Libby, Montana, some as young as ten years old, had developed asbestos-related diseases from exposure to tremolites-contaminated vermiculites, exemplifies the human toll of environmental asbestos exposure. This highlights the significance of chronic, non-occupational asbestos exposures via their homes, schools, neighborhoods, or naturally occurring geologic sources.

It has been reported that fiber dimension, bio-persistence, composition and surface reactivity are important criteria for the carcinogenicity of the fibers, indicating that carcinogenic mechanisms of asbestos are likely to be complex and involve multiple pathways. Previous work established that asbestos is an effective gene and chromosomal mutagen and that the mutagenicity is mediated by reactive oxygen species (ROS). However, the mechanisms by which asbestos produces malignancy in vivo are unclear. 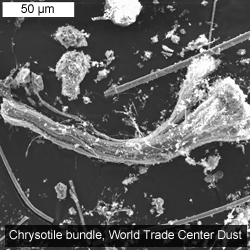 Advances: In a study building on Dr. Hei's previous findings that asbestos is mutagenic and induces multilocus deletions in mammalian cells, the research team used embryo fibroblast cells from the gpt delta transgenic mice to quantify and characterize the deletions induced by graded doses of chrysotile fibers.

They found that exposure to varying doses of chrysotiles for 24 hours produced a dose-dependent decrease in cell viability. Chrysotiles also induced a dose dependent increase in the number of mutations. Both the incidence and types of mutants resulting from exposure to chrysotile fibers were comparable to those induced by equitoxic doses of hydrogen peroxide, (H2O2), a powerful oxidant that not only induces damage to DNA, causing single- and double-strand breaks, base loss, base substitution, and cross-linking, but also causes chromosome and chromatid aberrations.

In an effort to understand the molecular mechanisms involved in the intra-chromosomal deletions induced by chrysotile, the researchers compared mutation patterns between chrysotile asbestos and ROS. The results showed that for chrysotile-induced mutants, the ratios of mutants with large deletions were similar to those induced by H2O2 at equitoxic doses. This suggests similar mutagenic mechanisms for asbestos fibers and ROS.

The study also showed that damage resulting from treatments with chrysotile fibers was inhibited by concurrent treatment with catalase. These findings provided strong corroborating evidence of the DNA damaging effects of chrysotiles through the oxyradical pathway.

To determine if nucleus is the necessary and sufficient target for asbestos-induced DNA damages, Dr. Hei's research team then performed a series of analyses using cytoplasts (without nucleus) exposed to crocidolite fibers to determine if mutations in the DNA can still be scored upon fusion of crocidolite asbestos-exposed cytoplasts with nucleus from untreated cells.

The study demonstrated that the nucleus need not be present at the time of fiber treatment to initiate the genotoxic events. Furthermore, crocidolite treatment of enucleated cytoplasts initiated oxyradical generation in a dose-dependent manner. Both the oxyradical generation and the mutation yield in the fused cells were dramatically decreased by concurrent treatment with dimethyl sulfoxide (DMSO), an effective radical scavenger.

The study also found that crocidolite fibers induced a dose-dependent increase of nitric oxide (NO) production, which was suppressed significantly with NG-methyl-L-arginine (L-NMMA), a nitric oxide synthase inhibitor. Similarly, there was a dose-dependent decrease in the mutation yield induced by crocidolites in the presence of graded doses of L-NMMA. Using western blotting for nitrotyrosine coupled with fluorescent probes, the investigators further concluded the importance of peroxynitrite anions in mediating asbestos induced DNA damage. 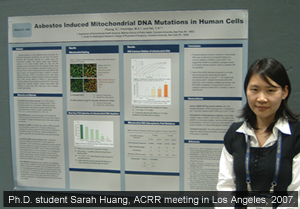 Significance: Although asbestos is a well-established human carcinogen, the underlying carcinogenic mechanisms are not clear. That asbestos has been used so extensively in industry and its physical durability make it an important health concern. Although the U.S. EPA has restricted the industrial use of asbestos in the U.S. since the early 1970's, the continued discovery of routes through which the general public may be exposed to asbestos suggests a long-term, low dosage exposure of a large number of people. Furthermore, there is evidence to indicate that the epidemic of asbestos-related diseases is rapidly emerging in developing countries where the magnitude of human toll is significantly higher than in the U.S. and Western Europe. A better understanding of the genotoxic/ carcinogenic mechanisms of this omnipresent environmental carcinogen is the only sure way to design effective interventional measures. The present studies from the SBRP laboratory at Columbia University provide evidence on the role of reactive oxygen and nitrogen species in the DNA damaging effects of asbestos and that extranuclear target could be important in the process. The research findings provide a basis for improved therapies for asbestos-related diseases.