Background: There is a great deal of interest in the use of trees to clean up contaminants found at hazardous waste sites. As a result of natural processes fueled by solar energy, trees offer great potential for environmentally sound and cost-effective clean-up of contaminated soil, groundwater, and air. Some tree species, particularly poplars, grow at a remarkable rate – up to 15 feet per year – and their root systems penetrate large volumes of soil. In addition to drawing water and nutrients out of the ground, these trees also take up organic contaminants and metabolize them to harmless products. It is well-documented that poplar trees metabolize trichloroethylene (TCE) to innocuous products. There is no release or sequestration of toxic intermediate metabolites such vinyl chloride, a known carcinogen.

This remediation strategy – known as phytoremediation – has many advantages over engineering methods such as "pump and treat", including being significantly less expensive, less intrusive, and more aesthetically pleasing. The disadvantages of phytoremediation are that it is often too slow, may be only seasonally effective or removes only small amounts of pollutant from the environment. Regulatory agencies often require significant progress in remediation to be demonstrated in only a few years, making most phytoremediation applications unsuitable. 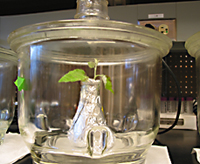 Advances: Since the 1980's, the NIEHS Superfund Basic Research Program has funded cutting-edge phytoremediation research at the University of Washington. Initiated by the late Dr. Milton Gordon, this work has evolved from identification of plant species best suited to remediation, to development of more effective hybrids, to on-going studies to develop a transgenic poplar (Populus tremula x Populus alba) with greatly increased rates of metabolism and removal of volatile hydrocarbons including TCE, vinyl chloride, carbon tetrachloride, benzene, and chloroform.

In a paper published in the October 23, 2007 Proceedings of the National Academy of Sciences, Drs. Stuart Strand and Sharon Doty report on their work to transform hybrid poplar with a vector containing rabbit cytochrome P450 2E1. The resulting plants overexpress cytochrome P450 2E1, a key enzyme in the metabolism of a variety of halogenated compounds. 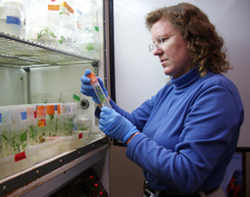 Drs. Strand and Doty then conducted studies to determine if the increased metabolism of TCE in the poplar cuttings led to increased uptake from solution and/or from air. They found that while control cuttings removed <3% of the TCE from hydroponic solution, the CYP2E1 transgenics removed 51% to 91%. When exposed to contaminants in the air, the transgenic plants also demonstrated increased uptake. The CYP2E1 plants removed 79% of the TCE from the air, while control plants did not show any statistically significant uptake of TCE. In 2 weeks, the control plants removed an average of only 13% of benzene from air, while two CYP2E1 plant lines removed 36% and 46%. 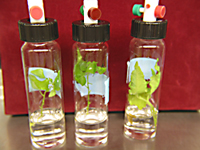 Significance: The SBRP researchers believe that this work represents the first development of transgenic trees for increased removal of a broad range of serious environmental pollutants from water and air. Additional studies are needed to verify efficacy under field conditions and to ensure that plant tissues do not cause unacceptable impacts on non-target organisms.