Background: Recent studies have raised concerns regarding the environmental fate of triclocarban (TCC, 3,4,4'-trichlorocarbanilide), an anti-bacterial compound commonly added to a wide range of household and personal care products including bar soaps, detergents, body washes, cleansing lotions and wipes (Halden and Paull 2005). Drs. Jay Chen and Bill Lasley, researchers in the UC Davis SBRP examined TCC's endocrine-disrupting (EDS) effects using a biomarker assay that they had created, since data on TCC's potential impact on reproductive health are scarce and outdated. Advances: The research group led by Drs. Chen and Lasley investigated the EDS properties of TCC using their androgen receptor bioassay to determine if the compound interferes with the natural action of endogenous androgens. The cell-based androgen receptor-mediated reporting system uses human embryonic kidney (HEK) cells lacking critical steroid-metabolizing enzymes. The cells were transfected with an androgen receptor (AR) and a plasmid containing a luciferase-reporting gene.

Tested alone at a concentration of 1.0 µM (~0.3 µg/mL), TCC exhibited no significant androgenicity. However, TCC had an amplification effect on strong native androgens such as testosterone (T), and the transcriptional activity was time- and dose-dependent as determined by the fluorescent signal in the androgen receptor assay.

To assess the mechanism by which TCC mediates the enhancement of the T-signal, the researchers added the antiandrogen flutamide to the test system. Flutamide blocked the amplification effect of TCC, indicating that the androgen receptor was necessary for TCC's actions. A competitive binding assay was run on TCC with no effect, indicating that TCC does not mimic testosterone and compete for T-binding to the AR.

The researchers' next step was to confirm the biological relevance of the in vitro findings by conducting in vivo studies. When castrated male rats were exposed to TCC in combination with testosterone propionate (TP), the researchers observed a substantial and significant increase in the weights of all accessory sex organs compared to TCC or TP treatment alone, indicating a synergism between TP and TCC in vivo. These data strongly suggest that TCC has a positive androgen receptor modulatory effect in tissues or cells that are androgen targets.

Significance: These findings suggest that TCC should be categorized as a steroid hormone amplifier or enhancer rather than as a simple agonist or antagonist because of the EDS property of synergism with the native androgen hormone receptor ligand. 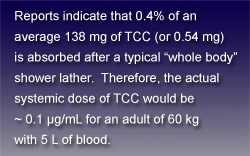 The amplification effect of TCC may have an array of widespread subtle physiological alterations in males and females. Hypothetically, amplification of androgens by TCC at the target cell may be associated with idiopathic hyperandrogenism, i.e., despite seemingly "normal" native circulating androgen levels, virilization may occur. It is also conceivable that exposure to TCC may result in defects in development or decreased reproductive function (i.e., sperm quality) in adults. In females, increased androgenic feedback could disrupt the normal female-specific "positive" feedback loop associated with ovulation. Exposure to TCC may also change the balance between estrogen signaling and androgen signaling in breast homeostasis. Depending on the level that hormone signaling pathways are disrupted, in utero exposure to TCC could also impair neurogenesis and sexually dimorphic neurobehavioral development. TCC has the potential to amplify synthetic steroidal compounds; as a result, further investigation of the interaction of TCC with oral contraceptives, hormone replacement therapy, synthetic androgens and glucocorticoid therapy is warranted.

Practically, because there is no strong evidence for the improved efficacy of TCC as an anti-bacterial agent in consumer products and as used by consumers, compared to similar products not containing TCC, consumers may want reduce their consumption of TCC-containing products. Likewise, its fate in the environment, especially through the land application biosolids route, and that of another common anti-microbial, triclosan (TCS), should be thoroughly re-examined.