Background: Exposure of pregnant women and children to pesticides and other Superfund chemicals represents a major environmental risk for effects on neurodevelopment. Rapid screening techniques are needed to focus resources on chemicals that pose the greatest potential risk. The process of assessing developmental neurotoxicity is complicated not only by the large number of chemicals and mixtures to be tested, but because the presumed mechanisms and nervous system effects seen in adults may be unrelated to developmental neurotoxicity. For example, it was believed that all organophosphates act similarly — through irreversible inhibition of acetylcholinesterase. Research conducted by Dr. Ted Slotkin at the Duke University SBRP demonstrated that organophosphates' adverse effects on brain development actually involve multiple mechanisms, many of which are unrelated to cholinesterase inhibition (see Research Brief 80). 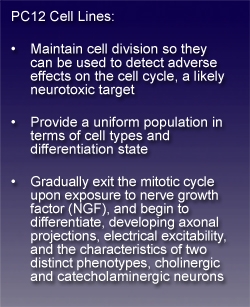 Dr. Slotkin's research group has developed an in vitro test system using PC12 cells to detect toxicant actions that target cell replication, as well as the events involved in differentiation and the phenotypic emergence of specific neuronal features. This system focuses on aspects of neurodevelopment that lend themselves to rapid screening and that permit ready comparisons of targets involving cell replication, growth, and differentiation.

With the in vitro model, the lab established that the organophosphates chlorpyrifos, diazinon, and parathion are equally damaging to neural cell replication and differentiation at exposure levels below the threshold for significant inhibition of cholinesterase. These effects intensify as the transition to cell differentiation is approached. The researchers also found that the organochlorine pesticide dieldrin and divalent nickel, which act through different originating mechanisms, elicit similar patterns of disrupted neural development. The organophosphates, as well as other agents, interfere with the specification of the cholinergic phenotype; these are the type of neurons that are the most sensitive to damage when assessments are conducted in vivo.

The researchers identified replication through early differentiation as the critical stages that are vulnerable to the developmental neurotoxicity of these agents and identified why certain circuits are targeted. With that information, the lab explored methods of amelioration, depicting that a "cocktail" of protectant drugs can prevent developmental neurotoxicity as a result of organophosphate exposure.

Finally, scientists continue to explore the events in gene transcription that precede the emergence of neurotoxic outcomes as a way of determining if there is a "fingerprint" pattern of gene expression that predicts whether given agents will be developmental neurotoxicants, and what their likely targets and critical periods might be. The lab has successfully defined gene groupings that make these predictions across different classes of compounds with disparate neural targets.

Significance: These results are important for three reasons:

The information provided by this work has been cited heavily in important documents for pesticide regulation, including the 2006 EPA Inspector General’s Report (Report no. 2006-P-00009), "Opportunities to Improve Data Quality and Children's Health Through the Food Quality Protection Act." This research served, and continues to serve, as an endpoint guide for studies of neurodevelopment outcomes in children exposed to pesticides, cited by a number of NIEHS-funded research centers.