Background: Growth and development require the expression of genes and gene products to be temporally and spatially coordinated.

In utero and early postnatal exposure to toxicants can affect gene expression, which can alter organ structure and physiological function. University of Arizona (UA) SBRP investigator, Dr. Clark Lantz, and his research team believe that in utero and postnatal arsenic exposure via drinking water, at environmentally relevant doses, can result in altered gene expression. These alterations in gene expression may impact lung and blood vessel development, resulting in chronic disease as an adult.

Advances: Dr. Lantz's team is using a mouse model to explore the developmental effects of arsenic in the lung. To determine if arsenic exposure during critical development could alter pulmonary function, the researchers exposed male and female mice, prior to mating, with up to 100 ppb (parts per billion) arsenic via drinking water. Arsenic exposure continued throughout the pregnancy and after birth. Once the pups were weaned, they were given water with the same level of arsenic for 28 days. The researchers tested the pups' pulmonary function and found that arsenic exposure induced airway hyperreactivity. To determine if this change was permanent, the researchers switched the mouse pups previously exposed to arsenic to control water for 28 days. Pulmonary function tests showed no reversal in airway hyperreactivity, suggesting that alterations induced by in utero and early postnatal exposures to arsenic are not reversible with the removal of arsenic.

Adult mice exposed to arsenic via drinking water for four weeks did not show the same arsenic-induced increase in airway reactivity as seen in mice exposed during in utero and early postnatal development.

To determine how arsenic can cause these functional alterations, Dr. Lantz’s team is examining anatomical changes in the airways and in tissues surrounding the airways. In humans, airway hyperreactivity is associated with increased levels of connective tissue and smooth muscle around the airways; the lab is currently looking at these parameters. Dr. Lantz’s data indicate that the expression levels of some extracellular matrix genes are altered by arsenic, and there is an increase in the amount of smooth muscle that surrounds the airways. The researchers are applying quantitative anatomical analyses to verify these changes. 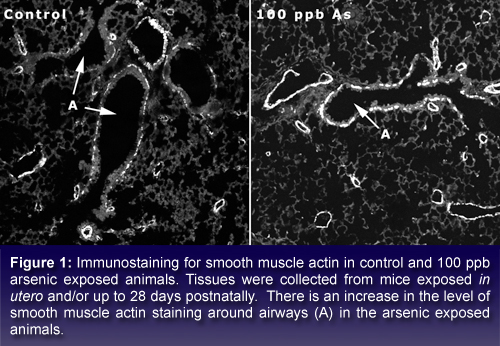 Significance: These findings may impact future public health policies by providing an intervention strategy to reduce adverse human health outcomes associated with arsenic exposure. It appears that the timing of exposure is important for inducing the alterations. For instance, in utero and early postnatal exposure can cause alterations in pulmonary function, while arsenic exposure, exclusively during the adult years, does not. Once exposure is established, alterations in pulmonary function cannot be reversed simply by removing the arsenic, which suggests that the timing of intervention strategies is important to reduce adverse effects.

These data also suggest that children exposed to arsenic during periods of critical development would have an increased risk of developing lower respiratory infections (LRI), which are a significant cause of infant morbidity and mortality in developing countries. Identifying environmental agents that may lead to increased LRIs, in addition to reducing exposure of pregnant mothers and young children to environmental agents, can, potentially, improve health in third world countries.