Background: Mercury (Hg) is typically oxidized or methylated in the environment before reaching human receptors.  However, mercury is often in the elemental state at the point of release, where concentrations are highest and the conditions for capture are most favorable.  Dr. Robert Hurt at the Brown University SBRP is working to improve the efficiency of elemental mercury capture by chemical modification of carbon sorbent surfaces.  The results of this work may be applicable to sorbent-based capture of mercury for spill scenarios, remediation technologies, respirator cartridges, incineration systems, and the largest application: coal-fired power stations. 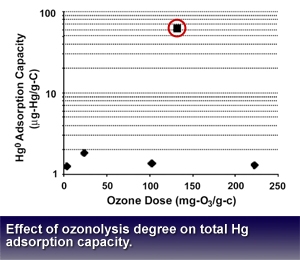 Early experiments indicated no significant enhancement of mercury capture efficiency by oxidation with ozone, hydrogen peroxide or air.  However, as shown by the square symbol in the figure below, a single experiment gave a very different result: a nearly 48 fold capacity increase.  Rather than discard this outlier, Dr. Hurt's group investigated and found that the data point was from a sample treated at high ozone concentration and immediately tested for mercury adsorption capacity. The researchers conducted additional experiments with freshly ozone-treated carbon materials at a range of ozone doses.  They confirmed that a dramatic capacity increase occurs when the adsorption takes place within 30 minutes of ozonolysis.  For example, capacity increases as high as 134 fold were observed with carbon black samples.  Interestingly, oxidation of carbon black with hydrogen peroxide or air did not lead to a significant capacity increase.

Dr. Hurt hypothesized that ozone treatment of carbon results in the formation of surface functional groups with oxidizing ability.  These functional groups might further oxidize the carbon substrate through decomposition, or oxidize adsorbate species such as mercury.  To learn about the chemical structure of the functional groups, the researchers conducted FTIR spectroscopic analyses of untreated, ozonated, and aged/ozonated carbon black samples.  These studies suggest that epoxides and (epoxide-containing) secondary ozonides are the most likely candidates for the surface functional groups.

Significance: Mercury contamination is both a local and a global problem.

Because carbon is a nearly universal environmental sorbent, used with both heavy metals and chlorinated organics (e.g., dioxins, furans, TCE), such fundamental research on optimal sorbent formulation and surface chemistry could have wide applicability.