Background: The switch from incandescent light bulbs to energy-efficient compact fluorescent lamps (CFL) represents a potential safety issue as CFLs contain 3 to 5 mg of mercury (Hg). Mercury is a neurotoxin of special concern for infants, children, and pregnant women. Dr. Robert Hurt, Director of the Institute for Molecular and Nanoscale Innovation at Brown University, and leader of an SBRP-funded research project, directs a team of scientists studying mercury vapor release from broken and spent CFLs.

Dr. Hurt's team, which includes engineering student Natalie Johnson, and graduate student Love Sarin, is working to address direct and indirect exposure issues related to the management of Hg from CFLs. Direct exposures to Hg can occur when lamps are broken during shipping, retail sales, consumer use, or recycling. Broken CFLs release Hg as a volatile vapor; 80% of inhaled Hg is physiologically absorbed. Indirect exposures can occur as the result of disposal. Mercury that leaches from a landfill or escapes in landfill gases can enter food webs, bioaccumulate, and eventually reach human food sources. Dr. Hurt's research focus is on the development of methods for Hg vapor capture and stabilization at ambient temperatures.

Advances: With the ultimate goal of identifying new high-efficiency sorbents to capture Hg from broken CFLs and/or for use in recycling efforts, Dr. Hurt's team began by characterizing the timing and extent of Hg released from broken CFLs. They found that initial Hg release is quite rapid (yielding concentrations in air near the bulbs of 200-800 µg/m3 during the first hour) and continues at significant levels for several days. In about four days, broken CFLs release ~30% of total Hg (1mg), leaving much of the Hg in the bulb debris to evaporate slowly. 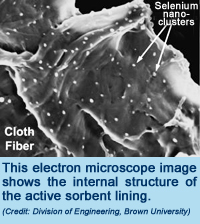 Next, the researchers evaluated candidate Hg sorbents. Based on the knowledge that Hg vapor capture on solids is largely dependent on surface area, they focused their attention on high-area, nanoscale formulations of common Hg sorbents. They determined the adsorption capacity of 28 sorbents used for Hg capture including sulfur-containing materials; metals and metal oxides; metal sulfides; carbon; selenium (Se); and two commercially available products. The adsorption capacities ranged from 0.005 to 188,000 µg/g. To identify sorbents most suitable for use for clean up or recycling applications, theresearchers calculated the amount of each sorbent required to capture 1 mg of Hg vapor at room temperature. They found that for some of the more common Hg sorbents (powdered sulfur or zinc), enormous amounts of material (>10 kg) were required; >10 g was required for most sorbents tested. The most effective sorbent was uncoated nanoselenium: < 10 mg captured more than 99% of the Hg vapor over a 24-hour period. In the body, Se sequesters Hg into insoluble and metabolically inactive mercury selenides. In the environment, the stable sequestration of Hg by Se may reduce its mobility, bioavailability, and ecotoxicity.

Dr. Hurt's group has engineered prototype sorbent-containing packaging and disposal bags to allow safe handling of CFLs. Their design inserts a 3-layered nanoselenium lining in retail packaging for CFLs. If a CFL is broken, the packaging can be placed over the area to absorbthe Hg vapor from the spill. The lining can also capture the Hg if the bulb is broken in the box. The researchers have also created a lining for plastic bags to soak up the Hg left over from the CFL shards that are thrown away. The Hg-absorbent packaging and the lined plastic bags can be safely discarded or recycled.

Significance: Fewer than 2% of CFLs are currently recycled though this fraction may increase in the future. Although biologically significant direct exposure to Hg is unlikely to occur from breakage of a single CFL, there may be some risk to unborn or small children upon continual habitation at break sites, especially involving multiple bulbs that are not properly cleaned up, or in shipping or at recycling centers where large numbers of bulbs are collected in confined spaces.

Dr. Hurt's research has generated an inexpensive, effective solution that could address many safety and public health concerns associated with CFLs. Brown University has applied for federal patents covering the mercury-absorption packaging and the absorbent material and plans to begin discussions with companies on manufacturing the new technology.