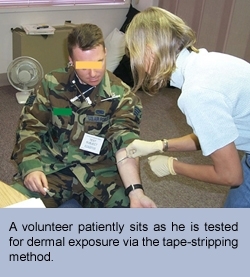 Advances: Dr. Nylander-French's research group has conducted an extensive series of studies focused on dermal exposure to polycyclic aromatic hydrocarbons (PAHs). To begin, Dr. Nylander-French developed and validated a non-invasive sampling technique, coupled with analytical methods (GC/MS; ELISA), to quantify dermal exposure to naphthalene as a chemical marker of exposure to fuels. The tape-stripping method involves applying a strip of adhesive tape to an area of skin following exposure, then removing the tape along with the contaminant and several micrometers of the outermost layer of skin. Repeated stripping of the skin can indicate penetration of the substance (depth-profile) and the spatial/temporal variations of different hazardous compounds in the skin.

Dr. Nylander-French used these methods to conduct laboratory and field studies of exposure to jet fuel (JP-8; using naphthalene as a marker) to evaluate the contribution of dermal exposure to total exposure. Her research group examined the correlations between dermal exposure to naphthalene measured with tape-strip samples of exposed skin and breathing zone, exhaled breath, and urine concentrations of napthol metabolites. The data show that the tape-stripping method is an effective technique for measuring dermal exposure, and that:

Dr. Nylander-French's group then developed an enzyme-linked immunosorbent assay (ELISA) to detect and quantify protein adducts of metabolites of naphthalene in the skin of exposed individuals. This work, the first to report of adducts of PAHs detected in exposed intact human skin, provides biomarkers of exposure allowing researchers to: distinguish acute and chronic exposures; investigate the importance of dermal penetration, metabolism, and adduction to keratin; and to more accurately predict the contribution of dermal exposure to systemic dose for use in exposure and risk assessment models.

Dr. Nylander-French has also contributed to the development of mathematical models to describe the uptake of PAHs into the skin. The epidermis is a complex organ with many metabolic functions. Many models of dermal absorption and penetration assume that diffusion is the dominant mechanism of transport and are based on the properties of the contaminant (molecular weight, solubility, reactivity). Dr. Nylander-French's group developed a physiologically-based pharmacokinetic (PBPK) model of exposure to JP-8 that incorporates inhalation and dermal uptake and they have validated the model with experimental human data.

Dr. Nylander-French has also developed a mathematical model to quantify the penetration of chemicals deposited on the skin surface into its deeper layers. This diffusion-based model assumes that the stratum corneum (outermost skin layer) is the rate-limiting barrier to the penetration of lipophilic compounds. The research group used the model to predict the variation in dermal absorption and penetration of three aromatic and three aliphatic hydrocarbons in JP-8. They found that the model outputs agreed with values measured from in vitro skin systems and biomonitoring studies.

In on-going work, Dr. Nylander-French is investigating the capacity of the skin to metabolize PAHs. Because metabolites (not parent PAHs) cause toxic effects, her group is investigating patterns of gene and protein expression in the epidermis that are critical to PAH-exposure response. Quantification of differences in biomarker response and sources of variance in response to exposure levels could predict individual differences and, thus, individual susceptibility to toxicity and associated disease.